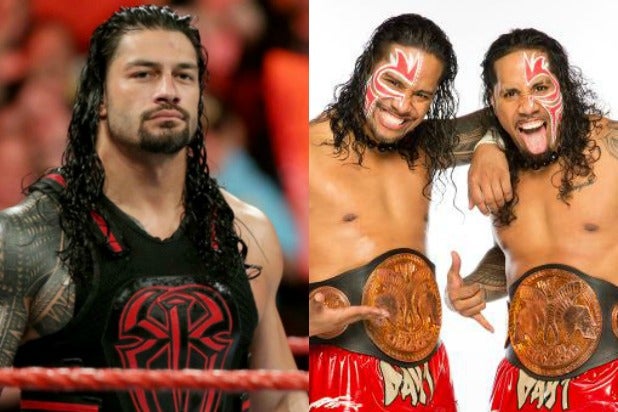 WWE tag team The Usos dedicated a big victory over AJ Styles and Daniel Bryan on Tuesday’s “SmackDown Live” to their real-life cousin Roman Reigns, who revealed one night earlier on “Raw” that he is battling leukemia.

A win in his name isn’t the only way the twins honored the Big Dog — whose real name is Joe Anoa’i — Tuesday night.

Mid-match, Jimmy Uso leapt from the top turnbuckle to deliver a frog splash to Styles. On the long way down, Uso locked and loaded Reigns’ patented Superman Punch pose before hitting the high-risk maneuver on the WWE Champion.

Watch it here in GIF form:

Best splash Styles has ever taken.

Reigns delivered the heartbreaking news of his cancer’s return in the somber opening segment to Monday’s show.

“For months now, maybe even a full year, I’ve come out here and spoke as Roman Reigns and I said a lot of things. I said that I’d be here every single week. I said I’d be a fighting champion, I said that I’d be consistent and I said that I’d be a workhorse but … that’s all lies,” he said from the middle of the “Raw” ring. “That’s a lie because the reality is … my real name is Joe … and I’ve been living with leukemia for 11 years. And unfortunately, it’s back.”

“But you want to know who gave me a chance? The team that gave me a chance was WWE,” Reigns said. “And when I finally made it to the main roster and I was on the road they put me in front of all of you…and to be honest, you have all made my dreams come true.”

“By no means is this a retirement speech,” he promised. “I will beat this, I will be back, and you will see me very, very soon.”

Readers can watch the moment here.

Tonight on ‘Monday Night Raw,’ Roman Reigns (aka Joe Anoa’i) announced that he is relinquishing the WWE Universal Championship and taking a leave of absence from WWE as he once again fights leukemia, which had been in remission since late 2008. Reigns is taking his battle with leukemia public in an effort to raise awareness and funds for research in order to advance cures for the disease.

Reigns was scheduled to defend his Universal Championship against Braun Strowman and Brock Lesnar at upcoming pay-per-view event “Crown Jewel,” which is scheduled for Nov. 2. Now it’s a one-on-one match between Strowman and Lesnar for the vacated belt.