A cartoon published in Australia’s Herald Sun of Serena Williams at the U.S. Open over the weekend is causing an uproar, with public figures like J.K. Rowling slamming the drawing for being “racist” and “sexist.”

“Well done on reducing one of the greatest sportswomen alive to racist and sexist tropes and turning a second great sportswoman into a faceless prop,” Rowling tweeted on Monday.

Mark Knight drew the cartoon for the Herald Sun newspaper, which shows Williams stomping on her racket, with opponent Naomi Osaka speaking to the umpire in the background. The umpire, who is probably meant to represent Carlos Ramos, says, “Can you just let her win?”

Many Twitter users doubled down on Knight, slamming his cartoon.

“You couldn’t be more racist if you tried – and you reeeeeaaally tried,” one user responded. “Using those classic sambo tropes- enlarged lips, overexaggerated body parts to depict Serena as hyper masculine- next time just use an old ad from the 1800s- no one would notice the difference in your racism.”

“Hey Mark bruv you should totally submit your latest masterpiece to the Jim Crow Museum of Racist Memorabilia in the USA!” said one user.

“This is antiblack, racist and misogynoiristic [sic]; you know that so don’t bother lying or diverting,” wrote another. “It’ll be filed under ‘racist cartoons’ for media students to examine in the future just as ones just like this in past are studied now. It’s not innovative, creative or accurate.”

Williams lost to Osaka in the finals on Saturday after being penalized both a point and a whole game in a dispute with Ramos. Williams broke down in tears in the second set as Ramos issued a series of code violations — beginning with a warning when her coach Patrick Mouratoglou signaled to her from his place in the stands, a mid-match coaching violation of the rules (though seldom called by officials, according to several experts who have since weighed in on the matter).

A second violation where she slammed her racket to the ground led to the loss of a point. But she was docked an entire game when she confronted Ramos a second time: “You stole a point from me. You’re a thief too.”

Although Williams refused to shake Ramos’ hand after the match, she graciously congratulated Osaka, the daughter of a Japanese mother and Haitian father who has trained for years in Florida — and discouraged fans from booing during the awards ceremony.

A spokesperson for Williams has not yet responded to TheWrap’s request for comment. TheWrap also reached out to the Herald Sun for comment.

See some reactions to the cartoon below.

Well done on reducing one of the greatest sportswomen alive to racist and sexist tropes and turning a second great sportswoman into a faceless prop. https://t.co/YOxVMuTXEC 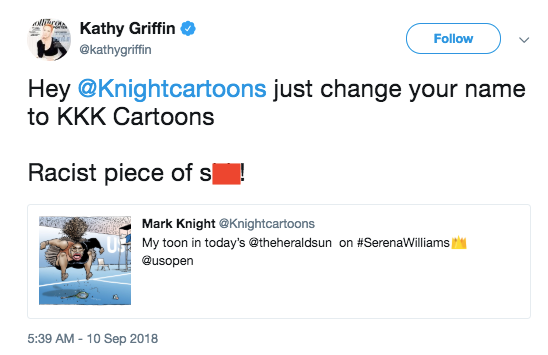 About as subtle as Fran Drescher’s voice 🤦🏿‍♀️ https://t.co/VM23b4XnlI

Did you mean for this to come off as racist as it does? Because it was a punch to the gut. Felt like I was looking at an archived cartoon from the 1930s. Wow…. just, yeah…. wow. Whatever point you were trying to make, you revealed a WHOLE LOT more about you, than Serena

It’s 2018 how is this cartoon considered ok? This is going back to the early Disney racist disgusting characterizations of Black People. Just dehumanizing. Then, you made #NaomiOsaka into a white girl with blonde hair ? This is not just an insult to #Serena but to all Black Women

This woman @serenawilliams has trained and won multiple grand slams. She is the most drug tested athlete on the planet. She has shown grace on the court and off and for you sir to draw something so disgusting is beyond me. #FireMarkKnight #HeraldSun