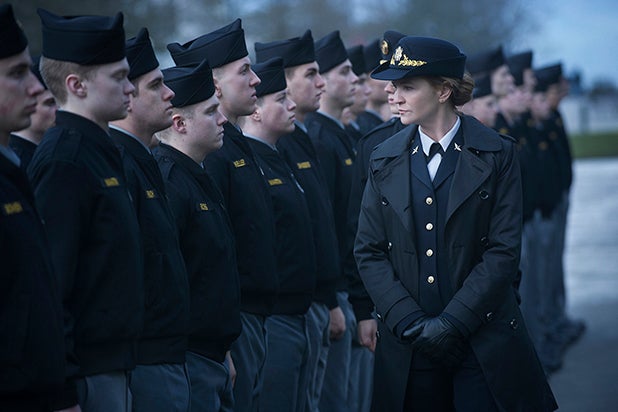 Detectives Linden (Mireille Enos) and Holder (Joel Kinnaman) take their investigative skills to an elite military school in a new case presented in the fourth season of Veena Sud‘s “The Killing.”

A whole family is massacred, survived only by the son Kyle — who himself was shot in the head during the incident. Kyle is a student at an all-boys military school that becomes the focus of Linden and Holder’s investigation into the murder.

See video: ‘The Killing’ Reviews Its Chilling Past Before New Season Premiere

Joan Allen is guest starring as Col. Margaret Rayne, the headmaster of the school, and is the subject of the first official image released from the show — which will air new episodes on Netflix for the first time. “The Killing” aired for three seasons on AMC before the network pulled the plug.

See also: ‘The Killing’ Revived for Final Season by Netflix

The first three seasons of “The Killing” can now be streamed globally on Netflix, with Season 4 set to debut on August 1.