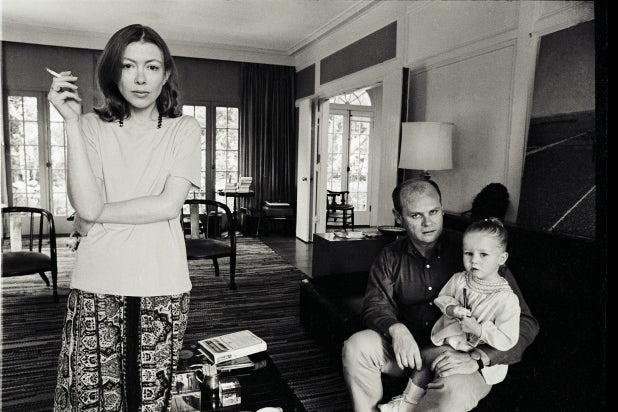 Joan Didion is viewed as a writer’s writer by a good many people. Her chiseled, deliberately repetitive sentences and apocalyptic “what’s the use?” point of view can be easily parodied, but when she has a worthy target — as when she has written about politics — her aim is often deadly accurate. Didion is a glamorous but humorless figure, a sparrow-like woman who sometimes moves in for the journalistic kill with the precision of a spider.

“Joan Didion: The Center Will Not Hold” (which debuts on Netflix Oct. 27) is clearly a labor of love from actor Griffin Dunne, who is Didion’s nephew from her marriage to the late writer John Gregory Dunne. It clocks in at a lean 90 or so minutes, and it might have given more time to certain sections of her life. But Didion is famous for her concision, and so at least this to-the-bone running time suits her image.

The surprising thing about the interviews here with Didion is how often she uses her hands when she talks. This notorious perfectionist, who places every comma with such deliberation, reaches her hands out in conversation in a strangely haphazard way, as if they are disconnected from her words and thoughts and have a life of their own. (In earlier footage we see of her as a younger woman, she does not seem to do this.)

Didion speaks very bluntly here, and sometime shockingly. When Dunne asks her how she felt when she saw a five year-old child on acid while reporting a piece about the 1960s counterculture, Didion blithely says, “It was gold …. you live for that.” This is not a hagiography or a standard tribute to Didion. Because of her own questioning presence on screen and also her voice-over when she reads from her own work, Didion seems to be in charge of this movie, and she does not flatter herself. She admits to a lot, including the ruthlessness and dispassion needed to write journalism on her high level.

This same honesty extends to her description of marriage to her husband, which was not always a happy one in the beginning. Of the friends who are interviewed in this movie, the writer Calvin Trillin is the funniest; he describes John Gregory Dunne as an inveterate gossip who was always coming in to say, “This you won’t believe.” For her part, Didion admits that her husband had a “horrible temper” and could be set off by anything, yet they had a deep simpatico that any writer might envy. They always edited each other’s work, and Dunne even edited a piece by Didion that mentioned how close they were to divorcing.

“You use what you have,” Didion says to her nephew here. “You use your material. And that was the material I had at that moment.” This comment mirrors Nora Ephron’s cheerful “everything is copy” approach to writing her columns, but it plays into Didion’s image of detachment, and her melancholy. She became a star writer partly because she was so good at taking moody author photographs that seemed to say, “I’ve seen the abyss, and now I want to show it to you.” The section here devoted to her writing about the Manson Family murder trial hits that distinctive Didion note of spookiness that might send a shiver down your spine if you are a fan or make you laugh if you are a detractor.

Didion has far more fans than detractors nowadays, and that is mainly because of her two memoirs about losing her husband and her daughter Quintana, “The Year of Magical Thinking” and “Blue Nights.” Dunne’s documentary emphasizes these two books and the play of the first book that starred Vanessa Redgrave on Broadway. Didion attempted to approach the subject of her own grief as if she were reporting on it, and she produced virtuoso examinations on death and meaninglessness from the perspective of a non-religious person.

“Joan Didion: The Center Will Not Hold” concludes with a scene where Didion is awarded a medal by president Barack Obama. Her weight as an older woman has sometimes been as frighteningly low as 75 pounds, and so when she comes up to get the medal she seems like a strong consciousness who has decided to do without a body almost entirely.

The look on Didion’s face when the medal is placed around her neck is very remote and pre-occupied. This look seems to be registering the meaninglessness of even this moment of professional triumph, and this signals to us that Didion is staying true to her image and to her character, which as an older woman have become one.