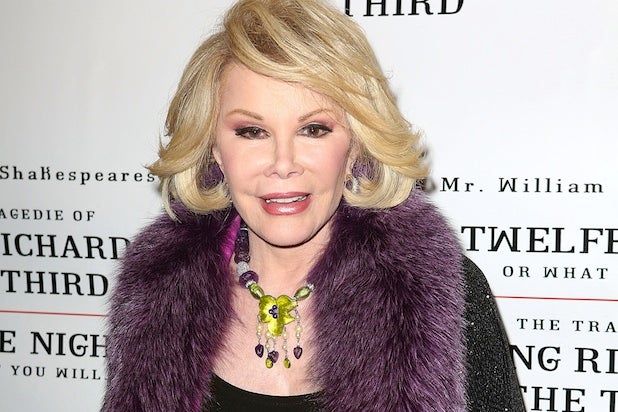 Joan Rivers wants the last word in her ongoing battle with the Writers Guild of America East and the writers on her E! show, “Fashion Police.”

As a result of a settlement with Rivers, WGAE president Michael Winship said Rivers’ recent reversal of her promise to support her staff writers in reaching a settlement with E! during an interview was “reprehensible” and that it was “exploring all options” in the matter.

In response, Rivers released a statement calling Winship’s comments “hurtful” and stated that she is still supportive of a an agreement between her writers and the cable channel.

“I am stunned by the WGAE’s recent personal attacks and allegations that I breached the Settlement Agreement in connection with the WGAE Charges,” Rivers said.

“I am supportive of the striking writers. I am hopeful that the writers will soon be covered by a WGA Contract as I have just learned that E! and the WGA are having an election in early December. As a long standing member of the WGAE, I am greatly confused and disturbed by Mr. Winship’s unprofessional and hurtful statements about my character – It is time for the focus to be on getting the writers a contract, not using me as a scapegoat.”

The host last month was brought up on charges and faced a fine and expulsion from the union for writing for the show while her team was on strike. She avoided the trial by agreeing to stop writing and urge E! to reach a settlement with her staff, but she reversed her stance in a the interview with the comedy website Splitsider.

“I never thought I’d say this, but E! was right! They wanted writers to take a vote before they went out and decided to strike and the WGA wanted them to negotiate to not take a vote,” she said.

“Well, we didn’t ask all the writers, so it’s such a stupid sloppy mess and it’s so stupid and it’s not helping anybody,” she continued. “And ‘Fashion Police’ goes out. Learn a great lesson. Life goes on! They’ve been striking; these poor shmuck writers have been out since April.”

The “Fashion Police” writing team has been on strike since April 17. The writers want the network to recognize the Writers Guild West as their bargaining representative, while the Comcast-owned network is insisting that a National Labor Relations Board election be held first.