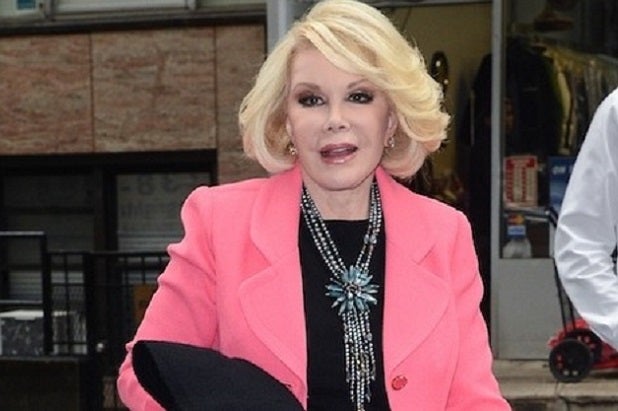 Joan Rivers and the Writers Guild of America have reached a settlement in their dispute over “Fashion Police,” averting a trial that could have resulted in fines or expulsion for the long-time TV host, the two sides said Monday.

The Writers Guild of America East had set Monday, Oct. 14, as the trial date for Rivers, who the union has charged with violating its bylaws during the ongoing “Fashion Police” writers strike against the E! Network.

“As a lifetime member of the WGA, I have always supported the writers and want what’s best for them,” River said in a statement. “In further support of the striking writers, I’ve decided not to render any writing services even though as a comedian and SAG-AFTRA host, I often write material for myself. Rest assured though I will always say what’s on my mind.”

Michael Winship, WGAE President said he was glad there wouldn’t be a trial.

“We recognize Ms. Rivers’ support for the striking writers and her illustrious career,” he said. “We are also pleased that, as part of the resolution of the Charges, Ms. Rivers has agreed not to write during the strike and to meet with E! to advocate for immediate contract negotiations in support of the Fashion Police writers.”

Eight “Fashion Police” writers have been on strike since April 17, after expressing a desire to organize and join the Writers Guild of America West. The writers want the network to recognize the WGA as their bargaining representative, while the Comcast-owned network is insisting that a National Labor Relations Board election be held first.

Weeks before going on strike, the writers filed $1.5 million in wage and hour claims with the California Division of Labor Standard Enforcement (DLSE) against the network and show host Joan Rivers‘ production company, Rugby productions. They are seeking payment for unpaid regular and overtime hours worked.