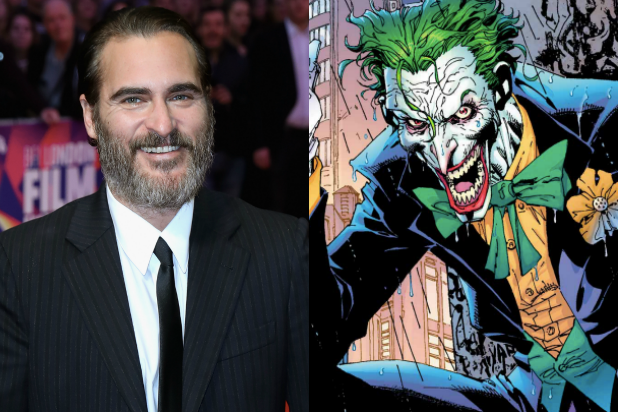 With Todd Phillips’ “Joker” origin movie getting the official green light from Warner Bros. this week, star Joaquin Phoenix said in an interview with Collider that the decision to play the supervillain wasn’t made lightly — and that is scares the “s–t” out of him.

“I take a lot of time and consideration when making decisions and what I’m gonna work on … always,” Phoenix said. “He seems to have a very interesting understanding of this world and what he’s trying to say. And so there is something very appealing about that and working with him on this particular project,” said of working with the “War Dogs” and “The Hangover Trilogy” filmmaker.

“It feels unique, it is its own world in some ways, and maybe, mostly, it scares the f—ing s–t out of me or something. It might as well be the thing that scares you the most.”

Phoenix has been thinking about a project like “Joker” for a hot minute. Phoenix added, “Three or four years ago, I called my agent and said ‘Why don’t they want to take one of these characters and just make a lower budget film about it, a movie but a character study, and why not take one of the villains?’ And I thought, ‘You can’t do the Joker, because, you know, it’s just you can’t do that character, it’s just been done.’ So I was trying to think of other characters, and he said ‘I’ll set up a general meeting with Warner Bros.’ And I said ‘I’m not gonna go, I can’t go to a general meeting.’ So I completely forgot about it, and so then I heard about this idea, I was like, ‘Oh that’s so exciting, that’s the kind of experience I wanted to have, with a movie based on a comic character.’ I felt like you could get something on screen.”

For fanboys thinking if this version will be connected to the larger DCEU, Phoenix goes on to say, “I wouldn’t quite classify this as like any genre. I wouldn’t say it’s a superhero movie, or a studio movie or a … It feels unique, and I think more then anything, and probably the most important thing, is Todd seems very passionate about it and very giving, and so that’s exciting.”

Check out the rest of the interview on Collider.

Under the direction of Todd Phillips, the film centers around the iconic Batman arch nemesis and is an original, standalone story not seen before on the big screen. Phillips’ exploration of a man disregarded by society is not only a gritty character study, but also a broader cautionary tale.

Phillips will direct from a screenplay he co-wrote with writer Scott Silver (“The Fighter”). The film will be produced by Emma Tillinger Koskoff and executive produced by Richard Baratta. It begins production later this year.