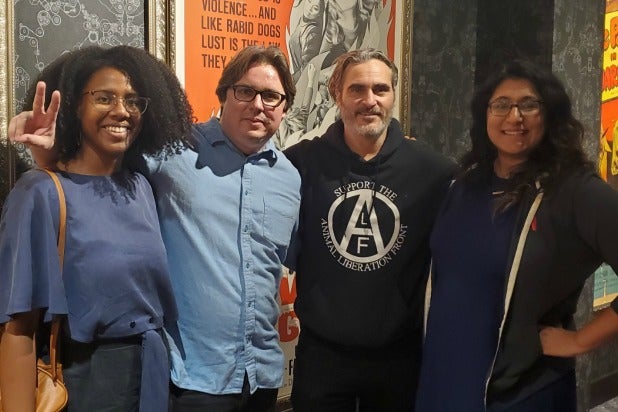 Moviegoers who went to see “Joker” at the Alamo Drafthouse in downtown Los Angeles got a big surprise on Saturday night when Joaquin Phoenix showed up for an unexpected Q&A session.

Dressed in a grey hoodie supporting the Animal Liberation Front — one of his longtime personal social causes — Phoenix went from theater to theater to say hello to fans and answer questions about his performance as Arthur Fleck, the mentally ill outcast of Gotham City who becomes the infamous Joker.

In the clip above, you can see Phoenix talk about the scene featured in the trailer where he dances on a set of stairs. He discusses how he worked with choreographer Michael Arnold on what has become the defining moment of the film.

It was an interesting choice for Phoenix to pick Alamo Drafthouse as the site of his surprise appearance. Earlier in the week, the premium theater chain announced that it would increase security this weekend at its 40 nationwide locations following fears that “Joker” would inspire acts of violence similar to the 2012 Aurora movie theater shooting. That didn’t stop “Joker” from setting a new October box office record with its $93.5 million opening weekend.