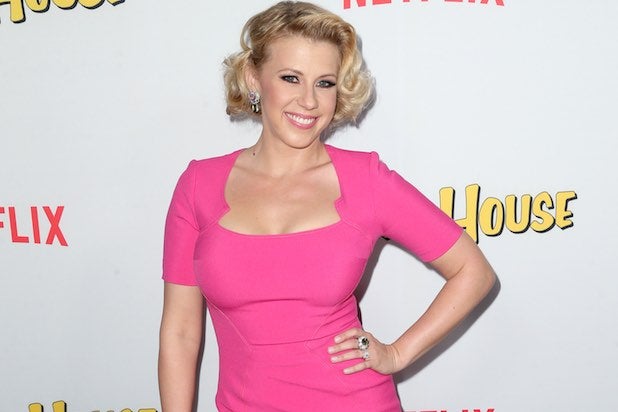 Jodie Sweetin’s house is a little less full these days, and she’s thankful for it.

Sweetin, who played Stephanie Tanner on “Full House” and its Netflix revival “Fuller House,” has obtained a restraining order against her former fiance, Justin Hodak, after what court papers described as a “violent argument” earlier this month.

According to the papers, which were filed March 24 and obtained by TheWrap, on March 18, Hodak “engaged in a violent argument with Jodie Sweetin” in their then-shared Studio City, California, home.

The papers claim that Hodak has a history of drug abuse but had been sober “for a time” before the alleged incident. However, the application for the restraining order said Hodak had allegedly been using steroids that “made his temper worse” and, on the night of the incident, he “was abusing alcohol and marijuana.”

According to the request for the restraining order, Hodak “screamed at Sweetin, using harshly abusive language” and “threatened to commit suicide if she made him leave. He then escalated the conflict by pulling down a seven-foot bookcase, which blocked the doorway to the room that Sweetin was in, effectively trapping her there.”

“He then took out a nine millimeter pistol, and threatened to use it. He later left the house, taking the weapon with him,”  the request said.

Sweetin also said that Hodak kept an illegal AR-15 assault rifle at the house, which the police have confiscated.

Following the breakup, Hodak allegedly made “at last 87 phone calls to Sweetin’s cell phone. He threatened to sell potentially embarrassing pictures of Sweetin that he has on his phone.”

The court papers also claim that Hodak “has a history of harassing the family members of his former girlfriends.”