A deceivingly edited video of Joe Biden supporting the re-election of Donald Trump made its rounds on Twitter Saturday thanks to White House social media director Dan Scavino, who shared it, and the president, who retweeted it.

The clip is of Biden speak to voters at a rally in Kansas City, Missouri, Saturday, in which he has some trouble getting out the thought, “We can only re-elect Donald Trump if, in fact, we get engaged in this circular firing squad here. It’s gotta be a positive campaign.”

It was edited, however, to end with Biden saying, “We can only re-elect Donald Trump.”

As of Sunday morning, it was viewed more than 5.8 million times and retweeted more than 34,000 times. Although Twitter labeled it as “manipulated media,” Scavino shared it. Trump, in turn, retweeted it.

Also Read: Colbert Imagines Bernie Vs Biden as a Fight Over 'The Lion King' Remake (Video)

According to the Washington Post, it is the first time the social network has utilized its new “manipulated media” label to warn of doctored or synthetic content, ranging from edited videos to “deepfakes” and everything in between.

Biden’s spokesperson Andrew Bates told CNN that Trump “has made it inescapably clear that he’s terrified of Joe Biden.”

Bates added, “It’s not surprising that Trump’s re-election campaign is resorting to more disinformation about the Vice President — after all, Trump himself is so panicked about Joe Biden that he got himself impeached trying to force a foreign country to lie about him.”

Below is a screengrab of Scavino’s tweet and below that is the video of Biden speech. 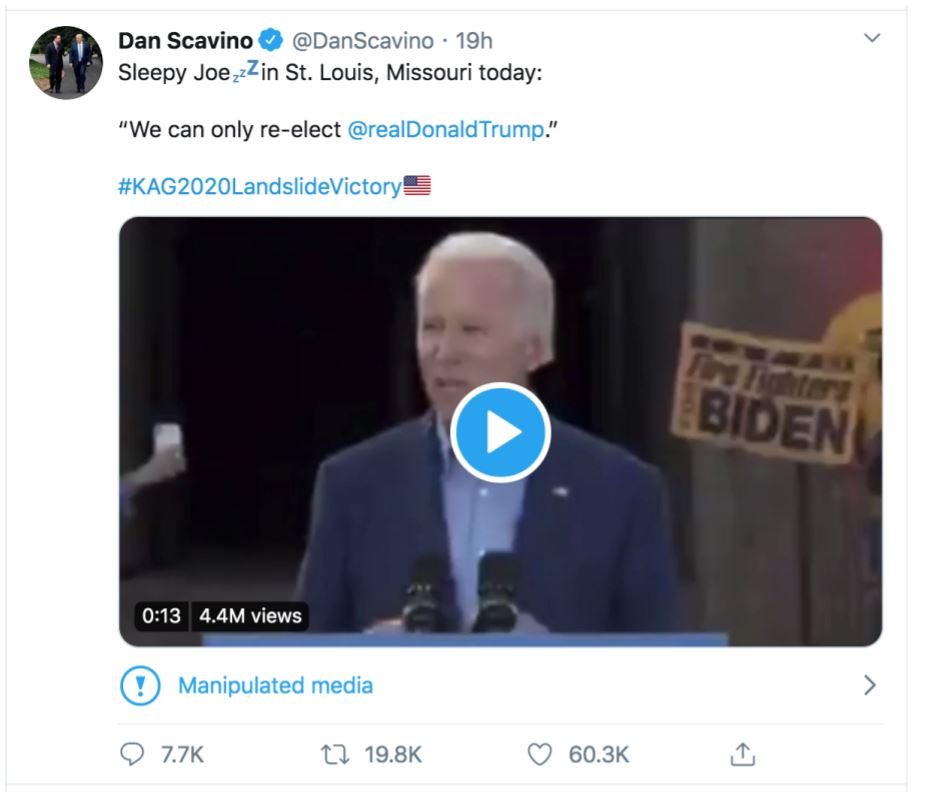