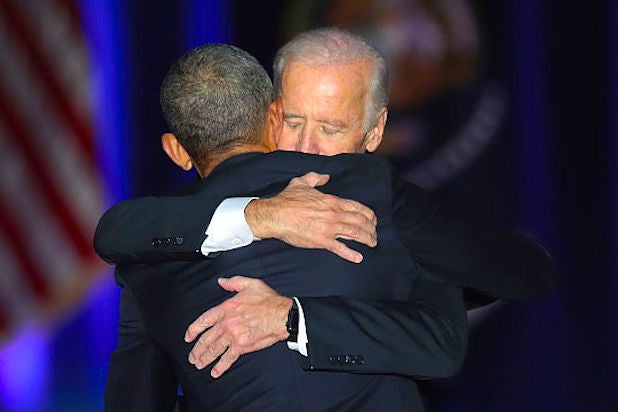 A lot has been written about the Joe Biden-Barack Obama bromance. The friendship between 44 and his VP was so close, it got its own name: “BROTUS.”

It officially reached iconic status when it became a trending meme last year. In June, even President Obama got in on the act when he made a video showing all the things that required more time than registering to vote, including making a friendship bracelet for Joe Biden.

But what we didn’t know is that Biden was not only aware of the memes, he got a kick of them. And he’s even got his favorite all picked out.

Biden’s daughter Ashley revealed to the Dow Jones blog Moneyish on Tuesday that when the memes started popping up on the interweb, her father “sat there for an hour and laughed.”

But there was one photo that seemed to have tickled him the most.

The meme features two side-by-side photos taken on election night in 2012. The one on the left shows Biden and Obama embracing while the one on the right shows Michelle Obama and Jill Biden hugging on the right.

The caption is apparently what had Biden so amused.

We didn’t think it was possible but we may be crushing on Uncle Joe even more now.

Biden’s daughter said her father looked through hundreds of memes before he noticed the one he liked best.

Obama: I have a meeting.

Biden: I have a meeting.

Biden: *whispers* I left a bag of Cheetos in the bathroom.

Biden: in case he needs to powder his nose.

Obama: "Joe, why are you still holding my hand?"
Biden: "I wanna freak Mike Pence out"
Obama: "But why?"
Biden: "Just roll with it" pic.twitter.com/o5KZZ0Ysgz

Biden: I gave him the wrong address

Biden: idgaf what they call him pic.twitter.com/qLJ8BB93p1

Obama: It's gonna be ok but we have to move.

Joe: But how will Santa know where to bring my presents next year?

Joe: I hid all the pens from Trump
Obama: Why?
Joe: Because he bringing his own.
Obama: ???
Joe: HE'S BRINGING HIS OWN PENCE pic.twitter.com/uni3WUd4X3

Obama: Did you replace all the toiletries with travel size bottles?
Biden: He's got tiny hands Barack, I want him to feel welcome here pic.twitter.com/e7NRIZ43Ww