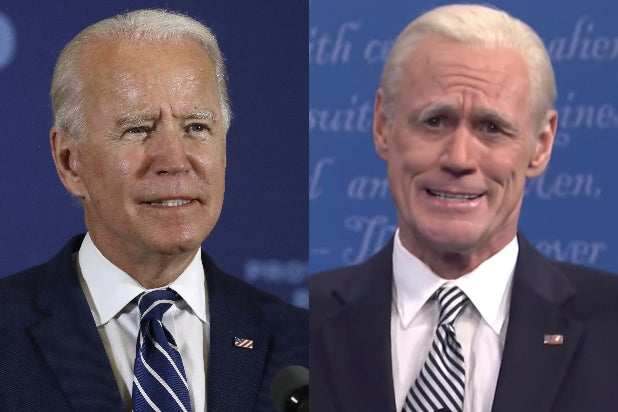 Joe Biden might be winning over voters these days — or so it appears — but Jim Carrey winning over critics and Biden supporters with his over-the-top impression on “Saturday Night Live,” not so much.

In the final weeks before the election, Carrey has taken the job of impersonating the folksy Democratic candidate for president on “SNL,” but many of the show’s viewers don’t think the former vice president and the manic comedian are a good fit.

In the show’s cold open the last three weeks, Carrey (and “SNL” writers) has lampooned Biden in such a way that has turned off many on social media. Viewers on Twitter — many of whom support Biden — have voiced that Carrey’s trademark balls-to-the-wall style didn’t mesh with Biden. Some even went as far as to say that his take on Biden made them “uncomfortable.”

I just now saw part of the cold open for SNL with Jim Carrey playing Joe Biden. Wow. It was terrible and I stopped watching. It was less an impression and more just Jim Carrey being Jim Carrey while dressed up as Biden. I love SNL but please put Jason Sudeikis in instead.

Imma just say it: not a fan of Jim Carey's Joe Biden….

Comedian Jim Carey is way too slapstick & ghoulish to be playing a guy many see as "Mr. Rogers". Actor Woody Harrelson is a much more normal depiction.

Others argued that the problem wasn’t Carrey as much as it was “SNL” writers for not coming up with enough good material on Biden’s political record.

It’s not Jim Carrey–it’s the writing. They’re trying to find something to make jokes about, but the GOP line of Biden being confused and out of it is not fair. He didn’t do anything like that in his town hall.

I wish he wouldn’t do it: “Jim Carrey has portrayed Biden as boring and cheesy, and the writers have really leaned into the “old” stereotype. He gets dizzy if he stands up too quickly and doesn’t even pretend to know what social media is all about.” #SNL https://t.co/QKpKupIKEq

Consequences of Sound writer Jesse Hassenger wrote, “Carrey has a better eye for Biden’s manner-the gleaming smile, the clunky folksiness, the tone of his voice-than SNL’s last regular impersonator Jason Sudeikis. What Sudeikis had, though, was an easy rapport with the audience.”

“Maybe he’s too physical a performer, or too needy a showman, to capture the flapjack earnestness of the former vice president,” according to a review in Vanity Fair. “It makes a person pine for Woody Harrelson and his chew gum dentures.”

Whoever is to blame, Carrey’s discomfiting, intense take on the political candidate whose core draw is his calm contrast to Trump’s chaotic, racist rhetoric isn’t the first time he’s made people squirm. While he’s done plenty of crowd-pleasing slapstick roles from The Mask and The Riddler in the ’90s to Dr. Robotnik in “Sonic the Hedgehog” this year, Carrey has also been known to give that style a darker edge. That edge was explored in the Netflix documentary “Jim & Andy,” which recounted Carrey’s performance as Andy Kaufman in the 1999 biopic “Man on the Moon” and his abrasive behavior during filming as he stayed in character even as the cameras were off.

“There has always been something bullying in Carrey’s performances,” wrote The New Yorker’s Ian Crouch in 2017 about the film. “A bold physical and emotional insistence that is at once alluring and off-putting–a mixture of aggression and vulnerability that dares you to look away, or to judge and dismiss, but also makes you afraid to do it, or feel bad for wanting to.”