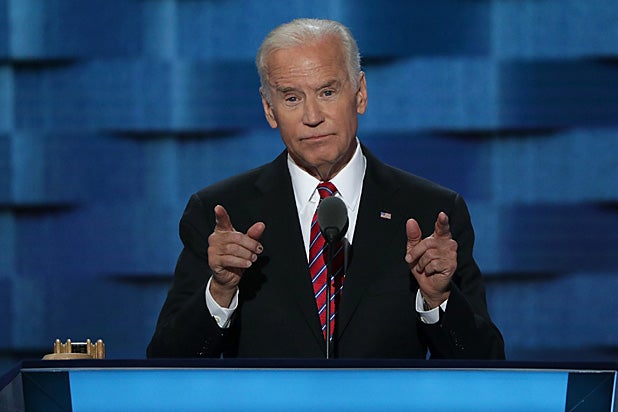 Former Vice President Joe Biden slammed President Donald Trump in an op-ed published Sunday in The Atlantic that addressed the recent violence at a white supremacist rally in Charlottesville.

The op-ed, titled, “We are living through a battle for the soul of this nation,” urges Americans to “do what President Trump has not.”

Trump was widely criticized for saying that people on “both sides” were responsible for the tragic violence that resulted in the death of a woman and dozens of injuries earlier this month when neo-Nazis and white supremacists clashed with counter-protestors.

“The chants echoing the same anti-Semitic bile heard across Europe in the 1930s. The neo-Nazis, Klansmen, and white supremacists emerging from dark rooms and remote fields and the anonymity of the web into the bright light of day on the streets of a historically significant American city,” Biden wrote. “If it wasn’t clear before, it’s clear now: We are living through a battle for the soul of this nation.”

Biden said that recent progress on civil liberties and civil rights and human rights have been “met by a ferocious pushback” from the “oldest and darkest forces” in America.

Biden said that Americans have fought this fight in the past but have a special challenge because President Trump “has publicly proclaimed a moral equivalency between neo-Nazis and Klansmen and those who would oppose their venom and hate.”

Biden continued: “This is a moment for this nation to declare what the president can’t with any clarity, consistency, or conviction: There is no place for these hate groups in America. Hatred of blacks, Jews, immigrants–all who are seen as ‘the other’ — won’t be accepted or tolerated or given safe harbor anywhere in this nation.”

Biden urged readers to “uphold America’s values,” while repeatedly noting that Trump has failed to do so. He concluded his op-ed by writing, “If there’s one thing I know about the American people, it’s this: When it has mattered most, they have never let this nation down.”