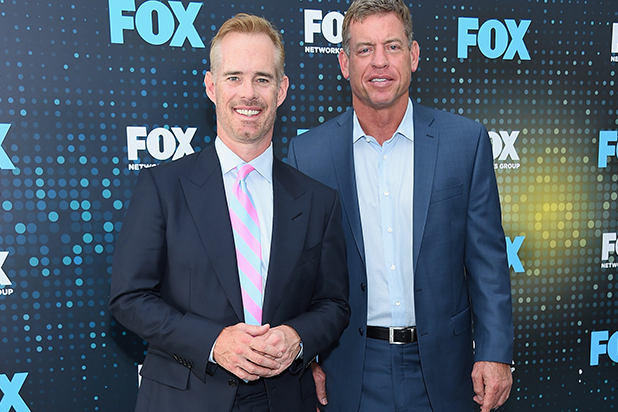 The duo will call all thirteen TNF broadcasts in the upcoming football season, the first of which will air September 13 as the Cincinnati Bengals host the Baltimore Ravens. That game and 10 more of the 13 broadcasts will air on FOX and simulcast via NFL Network and also distributed in Spanish on FOX Deportes, as well as on Amazon Prime Video.

“Since acquiring the rights to Thursday Night Football, we knew we wanted a big game feel,” said president of production and executive producer of Fox Sports John Entz. “There is no other tandem that is more synonymous with big NFL games on FOX than Joe and Troy.”

Aikman and Buck, who have been calling games together for 17 seasons, are the NFL’s longest-running broadcast team and will continue their duties as the voices behind “America’s Game of the Week.”

Earlier this year, Fox announced a five-year deal with the NFL to broadcast games between weeks 4-15 on Fox and simulcast on its other channels. The Thanksgiving evening game is technically a “Sunday Night Football” production, and thus still belongs to NBC. This agreement also includes all digital rights, which will allow Fox Sports to stream “TNF” games on mobile — which would be the first time that ever happened.

“This agreement is the culmination of over 10 years of strategic growth around Thursday Night Football, a period during which this property has grown from a handful of late-season games on NFL Network to a full season of games and one of the most popular shows on broadcast television with additional distribution via cable and digital channels,” NFL Commissioner Roger Goodell in a statement back in January.

“As one of the leaders in sports television and a recognized innovator of NFL game broadcasts for many years, we’re excited to be extending our partnership with Fox Sports, one of our most trusted and valued partners, to include Thursday Night Football,” he added.

This will also be the second year that TNF will be available to stream on Amazon Prime Video, as the NFL and the tech giant renewed their partnership earlier this year.