Fox is going back to the well with a series order for a revival of its infamous 2003 reality dating competition “Joe Millionaire,” the broadcast network said Wednesday. But this version of the series, dubbed “Joe Millionaire: For Richer or Poorer,” will feature a twist that will make it double the fun for viewers: “Two incredible single men … with one HUGE difference. One’s a millionaire, and the other is definitely NOT.”

Per Fox: “A twist on the original unscripted Fox dating series that turned reality television on its head, ‘Joe Millionaire: For Richer or Poorer’ will feature two single men – one is a millionaire, and the other is an ‘average Joe’ with little to his name. Twenty women will date both of them, but they will have no idea which Joe is rich. As love connections are made and each guy finds his perfect match, the women must ask themselves what is more important … Love or Money?”

The “Joe Millionaire” revival debuts in January on Fox. But if you can’t wait until then, Fox has already released a “For Richer or Poorer” trailer, which you can view via the video above. 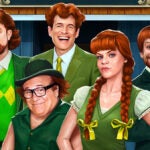 The first iteration of “Joe Millionaire” — which premiered in 2003 as the highest-rated and most-watched debut season for an unscripted series of the past 20 years, but only lasted for one more installment, “The Next Joe Millionaire” — will begin streaming Wednesday on Fox Entertainment’s free platform Tubi.

“This revival of ‘Joe Millionaire’ represents a potent combination: one of the most innovative and popular dating shows of all time with SallyAnn Salsano, who ranks among the most fearless producers in the business,” Rob Wade, Fox Entertainment’s head of alternative programming, said. “I’ve long admired ‘Joe Millionaire’ for its daring premise, and since the moment I joined Fox, I’ve wanted to bring it back in the spotlight in a whole new way for both new viewers and fans of the original.”