Joe Rogan told listeners of his podcast on Thursday that he wasn’t an anti-vaxxer but doubled down on his incorrect claims that young and “healthy” people don’t need to get vaccinated against COVID-19.

“I am not an anti-vaxx person,” Rogan said during the latest episode of Spotify’s “The Joe Rogan Experience.” “In fact, I said I believe they are safe and I encourage many people to take them.”

“I am not a doctor. I am a f—ing moron. I am a cage-fighting commentator,” he added. “I am not a respected source of information, even for me. But I at least try to be honest about what I am saying.”

But he also repeated some of his false claims from last Friday’s episode of his podcast which drew widespread backlash, including from none other than Dr. Anthony Fauci. “I just said if you’re a young healthy person, you don’t need it,” Rogan said. “Their argument was you need it for other people. But that’s a different conversation. And yes, that makes sense.” 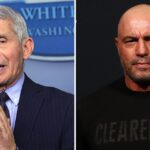 “You’re worried about yourself getting infected and the likelihood that you’re not going to get any symptoms, but you can get infected — and will get infected — if you put yourself at risk,” Fauci told Savannah Guthrie during an NBC News program about the pandemic. “Even if you don’t have any symptoms, you are propagating the outbreak because it is likely that you — even if you have no symptoms — that you may inadvertently and innocently then infect someone else who might infect someone who really could have a problem with a severe outcome.”

Spotify, which hosts Rogan’s podcast, has not responded to inquiries about Rogan’s vaccine comments.