Joe Rogan’s latest target: “Saturday Night Live.” During a podcast episode on Wednesday, Rogan ripped into “SNL,” calling it a “den of thieves” and accusing the show of stealing content from its pool of applicants and even from its own staffers.

“By all accounts, that place is a den of thieves,” Rogan said on “The Joe Rogan Experience” while speaking with comedian Shane Gillis. “You hear Jim Breuer’s account of the climate in that place and it’s horrific. They’re all stealing from writers, they’re stealing from performers. If you’re a writer and you submit your packages, the higher-up writers will steal your s—, according to Breuer.”

He continued, “If you submit a package, they own that package, even if they don’t hire you. So if you have some great premises, they decide they’re just going to take your premises and not hire you, they own all those bits.”

Breuer was an “SNL” cast member from 1995-98 and said in an interview last year that while he “roots” for SNL and its cast members, he didn’t continue watching the show after he left.

Shane Gillis, on the other hand, candidly discussed his firing from “SNL” on Rogan’s podcast. The comedian was announced as a new cast member on the show back in 2019, but was fired four days later after clips of him making jokes with racial and homophobic slurs resurfaced. Unsurprisingly, he agreed with Rogan’s disparaging comments about “SNL.”

Watch the clip from “The Joe Rogan Experience” here or above. 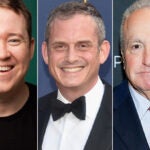