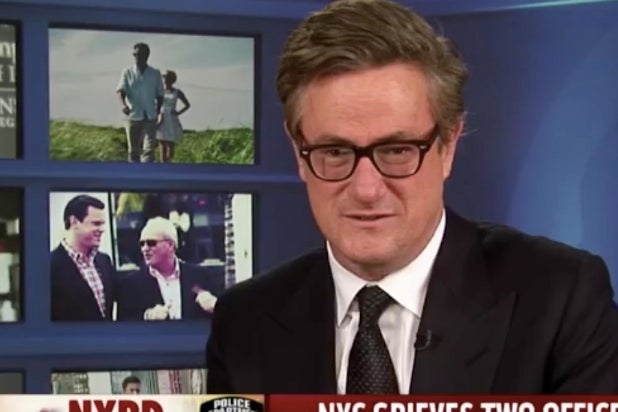 “The cop killers hatred was fueled by an avalanche of hate speech that was directed to law enforcement officers in general over the last four months,” Scarborough said.  “To listen to protestors, editors, and left wing talking heads go on and on since the shooting of Michael Brown, you would be led to believe that white police officers were randomly driving through black neighborhoods searching for young black males to shoot down.”

Scarborough went on to point blame toward the paper of record.

“Words matter, and I was worried after the tragic shooting—and it was such a tragic shooting in Cleveland—that the New York Times putting up a caption that read ‘police kill child with toy,’ again painted police officers as beasts.”

Scarborough went on to continue the “words matter” mantra, then turning his ire toward the medium he hosts on every day.

“Ugly elements of those marches—those marches in New York—show just how much hatred against police officers has been stirred up over the past four months of constant anti-police propaganda online, in newspapers, and yes, on cable news.”

On the Sunday morning political shows, former New York City Mayor Rudy Giuliani pointed blame toward President Obama and New York City Mayor Bill de Blasio for drumming up ill will toward police over the last few months through their statements about the Michael Brown and Eric Garner cases.