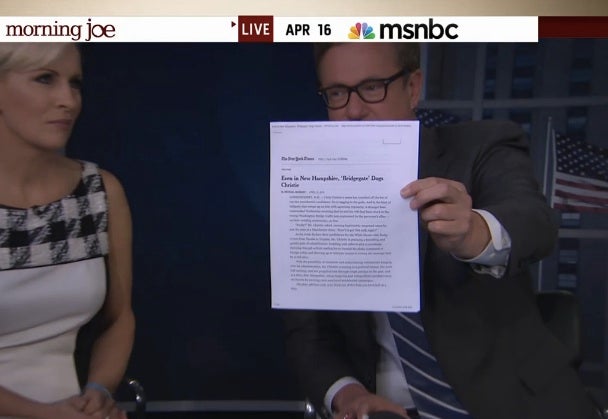 “You’re doing some good work in some areas … but they have had a naked agenda on driving this story from the very beginning,” the MSNBC host said. “That is an embarrassing headline for The New York Times to write this morning.”

He went on to suggest that the New Jersey Bridge controversy from 2013 has a number of up-in-the-air factors and might not even play a significant role in Christie’s fortunes during the Republican primary.

“For that to be the headline of a major national figure going to New Hampshire is embarrassing for The New York Times,” Scarborough continued. Co-host Mika Brzezinski agreed, adding the actual story doesn’t back up the headline.

Scarborough said he hopes the paper starts covering Christie fairly as the campaign goes on. Across the NBC-family dial, Christie spoke to Matt Lauer Wedneaday morning in an exclusive.

In their discussion, Christie took shots at media coverage of him: “Matt, if they played as many negative things about you as was played about me, intensely, over and over again, it’s going to affect anybody. But that’s in the past and poll numbers go up and they go down based on your performance.”

Also Read: Jon Stewart Rips NJ Governor’s Ebola Quarantine: ‘Why Does Christie Have to Be Such a Dick?’ (Video)

The governor says he still has not made up his mind on whether he’ll run for president in 2016. But if we’re speaking reality — most governors aren’t chatting with New Hamphire-ites and sitting down for exclusives if they’re not planning something.

Watch both interviews below