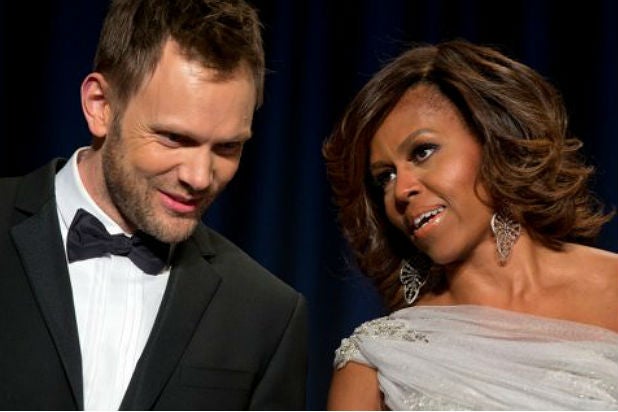 Joel McHale warned the audience at the top of the night at Saturday’s White House Correspondents’ Association dinner that they were in for a bumpy ride for good reason — most of the actor’s off-color jokes elicited shock from the more uptight political crowd.

“Strap in. Here we go,” McHale said at the outset of his headlining act.

McHale’s schtick started with a few good-natured jabs at President Obama, but the audience winced at a punch McHale swung at singer and fashion mogul Jessica Simpson, who was in attendance.

“I’m a big fan of President Obama. I think he’s one of the all time great presidents — definitely in the top 50,” McHale joked.

“Please explain that to Jessica Simpson,” he added, a nod to Simpson’s often ditzy persona.

McHale admitted that was low, but followed with another groaner about Guantanamo Bay.

There were plenty of fat jokes about New Jersey Gov. Chris Christie to go around — and Christie was in attendance to hear every one of them. McHale did deliver a few complex jokes about Christie’s “Bridgegate” scandal, though, which even the governor found chuckle-worthy.

Where Obama made several timely racial jokes, making light of the Donald Sterling scandal and the Cliven Bundy fiasco, McHale’s hit the ground with a thud.

“E! is also home to the Kardashians who, believe it or not, are Republicans. And I know that because they’re always trying to screw black people,” McHale said.

But pop culture groaners aside, McHale cleverly skewered the journalists who filled the room, taking swipes at MSNBC, CNN, and Fox News alike.

“MSNBC is a confusing place. I mean, Al Sharpton is their skinny guy!” McHale joked.

“And CNN is desperately searching for something they’ve been missing for months: their dignity,” he said.

“At this point, CNN is like the Radio Shack in a sad strip mall. You don’t know how it stayed in business this long, you don’t know anyone that shops there, and they just fired Piers Morgan,” McHale added.

A reaction shot of CNN’s Wolf Blitzer suggested the jokes did not go over well at the CNN table.