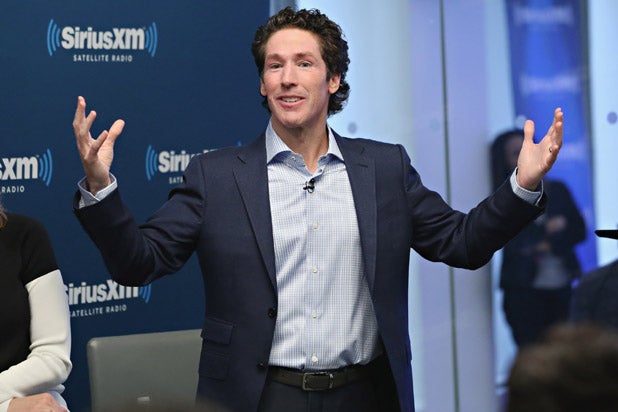 Save your wrath for someone else, social-media haters, because it’s just rolling off of Joel Osteen’s back.

Megachurch pastor Osteen, who was widely criticized this week for initially not opening his 16,000-seat Lakewood Church to victims of Hurricane Harvey, spoke to ET on Thursday, telling the outlet that he’s “not really concerned” about the criticism he has faced over the handling of the situation.

“You know, I’m not really concerned about the Twitter critics,” Osteen said. “We’re concerned with these people [victims now at the church] and how they move forward. And there were safety issues that people don’t understand. But, I really believe that if people were in my shoes, they would have done the same thing. When the building is clear, when it’s safe, we can start taking people. That’s what we have done for 60 years. We love helping people and that’s what our message is all about.”

Osteen was crucified on social media amid reports that he hadn’t opened his Houston facility to evacuees affected by the storm.

On Sunday ,as Lakewood remained closed over the weekend, the congregation’s Facebook page said that the church was “inaccessible due to severe flooding,” though the message didn’t clarify whether the church itself was flooded.

In his ET interview, Osteen allowed that church staff could have been better prepared to shelter the hurricane victims. (The church eventually opened to evacuees, with Osteen saying on ABC’s “Good Morning America” that the church was “taking people as soon as the floodwaters receded.”)

“Knowing what I know now, I would have put staff in here before the storm hit, put beds, do everything we could to be prepared,” he says. “When it catches us by surprise, even when the cities overflow and, you know, nobody dreams that shelters will overflow. … Hindsight, it’s 20/20, but we got to move forward and do what we’ve done for the last 60 years and take care of these people, help them rebuild their lives, bring hope to their spirits and let them know that they can come out of this stronger than before.”