John Carpenter is set to executive produce a new “Halloween” movie for Miramax, and he promises that it will be “the scariest of all.”

The multiple award-winning filmmaker behind the original 1978 “Halloween” film will return to the franchise that terrified a generation of moviegoers.

Malek Akkad will serve as producer under his Trancas banner, with Jason Blum producing for Blumhouse Productions.

The new horror flick was jointly announced by Miramax and Trancas International Films on Monday night. Miramax, which holds worldwide distribution rights to “Halloween,” will determine its theatrical distribution partner at a future date.

“Thirty-eight years after the original ‘Halloween’ I’m going to help to try to make the 10th sequel the scariest of them all,” Carpenter said in a statement.

“Trancas International is thrilled to be teaming up with Miramax on Halloween,” Akkad continued. “We are eager to make a film that will be a milestone in the franchise’s legacy and that will excite the fans, young and old.”

Meanwhile, Blum credited the franchise for inspiring his company to get into scary movies.

“The great Malek Akkad and John Carpenter have a special place in the hearts of all genre fans and we are so excited that Miramax brought us together,” he said. “We cannot wait to find and collaborate with the right filmmaker to give ‘Halloween’ fans the movie they deserve.”

The “Halloween” film franchise that was started in part by Carpenter and Akkad in 1978 has spawned 10 films since Michael Myers first began hacking away at teenagers, generating a total of nearly $400 million in worldwide box office.

The original slasher-flick starred Nick Castle as Myers (a.k.a. The Shape), Jamie Lee Curtis in her film debut as Laurie Strode, the girl he stalks after escaping from a psychiatric hospital, and Donald Pleasence as Dr. Loomis, desperately trying to track down his patient.

The first sequel, “Halloween II,” was released in 1981, three years after its predecessor, featuring Myers once again on a Halloween night quest of murder and mayhem. Curtis and Pleasence reprised their roles, but their seemingly-unkillable masked stalker was then played by Dick Warlock.

Carpenter has written, directed, composed and/or edited more than 20 films over the course of his career. Along with “Halloween,” he is best known for “The Thing,” “The Fog” and “Big Trouble in Little China.”

Aside from inducing countless nightmares, the 68-year-old is also an active musician and kicks off his world tour in Los Angeles later this month.

Carpenter is repped by APA and Stankevich Law. 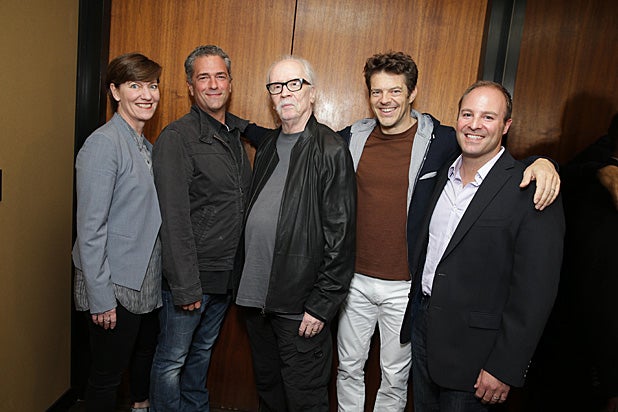