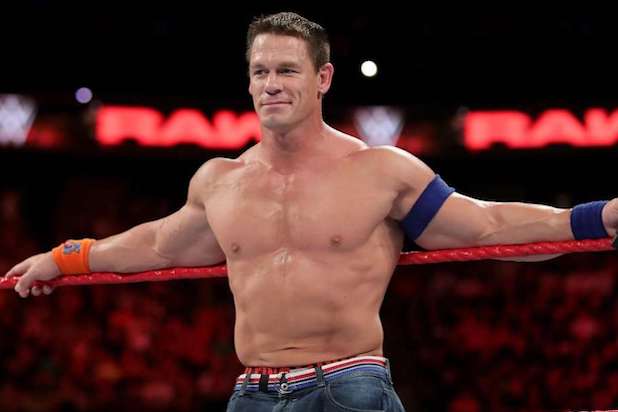 John Cena is a busy dude, and if the emerging actor ever truly wants to emulate Dwayne “The Rock” Johnson’s career progression towards Hollywood leading man, the new host of the Nickelodeon’s new “Are You Smarter Than a Fifth Grader?” knows there are only so many more WWE runs he has left.

But will Cena, who made a surprise cameo appearance to beat up fellow wrestler Elias at last month’s WrestleMania 35, head back to even semi-regular in-ring competition anytime soon?

“That literally depends on the immediate future. There’s a few opportunities that have been set in front of me,” Cena told TheWrap. “If they work out — and I hope they work out — they’ll be wonderful challenges in life and for me to grow as a person, so I’ll more than likely take them. It doesn’t mean that my heart doesn’t lie with WWE.”

And there’s something else.

“I’m older now,” Cena added. “I just turned 42, I watch WWE on a regular basis and the talent is getting faster and more precise.”

Cena also doesn’t believe WWE needs him — at least, not as much as it used to.

“I think I would have left the WWE high and dry, so to speak, [but] now they have so much talent and so many definable Superstars,” Cena said. “There was a time when I could genuinely say, from a financial standpoint, they needed me — that time is up.”

We’re glad you brought up the financials, Big Match John. After experiencing a rough start to 2019, WWE Chairman Vince McMahon blamed lower quarterly revenue on not having some of his top wrestlers available, a point we brought up to Cena.

Cena, who said he and the boss still “talk all the time,” sees the missing-Superstar thing as an opportunity for the active locker room — and for the future of WWE shareholders.

“I only got a chance to be on television because Brock Lesnar left, Steve Austin left, Dwayne Johnson left, Mick Foley got hurt, Triple H got hurt, the Undertaker got hurt,” Cena said. “[McMahon’s] class of the Attitude Era changed and they had to rely on new people. In doing that, they took a tremendous financial hit up front, but in the longterm it ended up going strong for a decade and a half.”

“[WWE is] certainly in a better place now than they were in let’s say 2003, and I know Vince will say on a quarterly call that he needs his stars, but he’s also aware that he’s developing them at a more rapid rate than he did when I started,” he said. “So I think the future is tremendously bright for WWE.”

“The WWE does not need me. I need it and I love it, and I love every single moment I’m associated with it,” Cena said. “But I felt it the first time this year at WrestleMania: I took a step back and looked at everything and (realized) it is such a powerful machine.”

Of course, Cena knows the door is always open for him to return, even if he’d like to peel back that proverbial curtain in a different way next time — especially because he’s not sure he can live up to audience expectations between the ropes.

“I’ve made it a promise never to shortchange the WWE consumer,” Cena said. “They are dedicated, they demand excellence and if I can’t keep up with the speed of the show then I’d coach, I’d go down to the Performance Center often and speak to the students. I live in Tampa, which is close to Orlando. I am not saying ‘I’m doing this and leaving you guys behind.’ I’m having a talk with the man in the mirror and saying I might be a step slower and I am not sure it is right for me to go on. You always want to walk away at the right time and never want the courtesy clap from the audience.”

Yes to all of that.

“I don’t want to go out there and think I can perform like I’m 30, because I can’t,” he continued. “It’s something I’ve seen a few instances of and I’m going to try everything in my power not to do that.”

“I am not sick of it, I am just trying to have that realistic conversation that not many people in sports or entertainment — or sports-entertainment — have, they want to hold on to that flame as long as they can,” Cena said. “I would much rather leave a lasting impression for what I did then try to milk the system for selfish gain.”