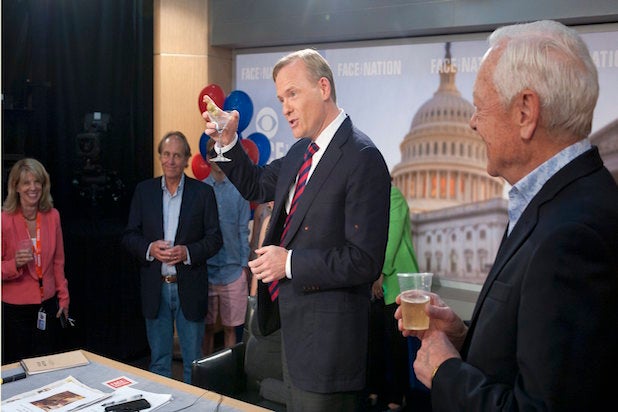 John Dickerson stepped into the moderator’s chair for CBS’ “Face the Nation” one year ago today and would have never guessed Donald Trump would be the presumptive GOP nominee for president on his anniversary.

“It’s another quiet election, just like every other election,” Dickerson joked to TheWrap before a taking a more serious tone: “No, I wouldn’t have guessed.”

Dickerson said the Republican nominee has created an “entirely new coalition and challenged a party in a way we really haven’t seen since [Barry] Goldwater in 1964.”

On Sunday, Dickerson made headlines for pressing Trump repeatedly on his assertion that U.S. District Court Judge Gonzalo Curiel’s Mexican American heritage means that he has “bias” against the mogul in a case involving Trump University.

Dickerson also got Trump to say “it’s possible” a Muslim judge would also treat him unfairly.

But getting newsworthy responses from one of the most media-savvy politicians in years isn’t easy.

“Donald Trump is a new kind of challenge to interview. All politicians, they don’t take truth serum,” Dickerson said. “He’s a challenge but, on the other hand, he’s more candid than anyone we’ve had in a long time. Think about the things that have shocked people. They came right out of his mouth and he’ll keep saying them.”

Dickerson, a former White House correspondent, feels that Trump’s combativeness with the media could continue if he’s elected.

Dickerson credited the “genius” of everyone at CBS to get him in the chair with enough time to be comfortable moderating before the election season got into full swing.

The results speak for themselves. “Face the Nation” finished the 2015-2016 television season with its largest audience in at least 28 years and as the No. 1 Sunday morning public affairs program for the fourth consecutive year, according to Nielsen.

The “Face the Nation” staff surprised Dickerson after Sunday’s show with a cake and a champagne toast.

Dickerson, who interviewed House Speaker Paul Ryan for this weekend’s show, said he has another name on the top of his wish list for his second year: “I’d love to interview the pope.”

Dickerson said he would “love to interview the Pope” when pressed about plans for his second year.