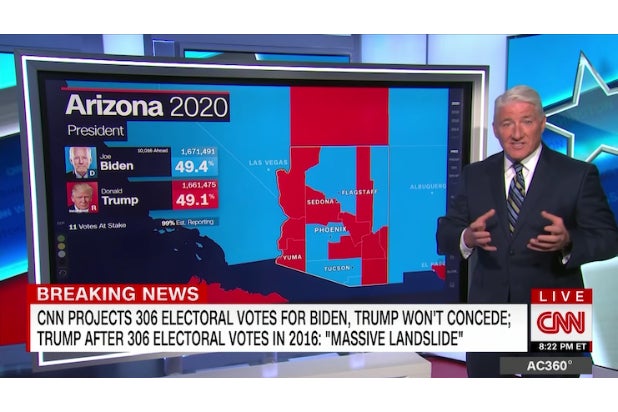 Even as this month’s election unfolded at an excruciating pace, two men — not named Joe Biden or Donald Trump — emerged as fan favorites for the anxious TV watchers: CNN’s John King and MSNBC’s Steve Kornacki. But do they secretly harbor a rivalry for the title of Best Map Guy?

In a Tuesday interview with New York magazine, King didn’t say as much but did note that he doesn’t really watch Kornacki’s coverage — and that’s because he’s busy himself on live TV.

“Do you feel any sort of rivalry with your state-election-board peer, MSNBC’s Steve Kornacki?” New York magazine’s Dan Hyman asked.

“I don’t know him. And, honestly, I don’t have a clue what he’s doing most of the time cause I’m on live television,” John King said. “When I’m sitting in my office, I’ve got a TV that has the four-box thing on it, so it has Fox and MSNBC and Fox Business and CNN. So I’ll see him every now and then — preelection or postelection.”

“Steve’s from Massachusetts, like I am, so we should know each other, I guess,” he added.

Much like Kornacki, King was a bit of a star on social media as a result of all the election coverage, thanks to his steady presence in front of CNN’s “magic wall.”

“I looked at the Twitterverse, and that’s when I was like, ‘Wow!’ And what struck me was the range of it: There was so much international stuff and so much from young people,” King told New York magazine. “That’s the part I found both interesting and noteworthy. I was laughing that there was TikTok stuff. I was like, ‘Okay, a 59-year-old man on TikTok. Yay?'”

As for where things are now, post-election, with Donald Trump still contesting the results, King said he wasn’t “surprised.”

“He told us he was going to do this. But where’s the proof? If the bank had been robbed, the money would be gone. Listen, he won the presidency [in 2016], he succeeded in a hostile takeover of the Republican Party — he did all these things everybody said he could not do. So certain things have worked for him. And now he’s going back to the mat. But just like he couldn’t make a virus disappear, he can’t make math disappear,” King said.