King is perhaps best known for hauling out a digital imaging board — "the Magic Wall," in CNN speak — every election season to explain the intricacies of the Electoral College and the latest polling data.

His style is much more understated and measured than the firebrand Lou Dobbs, who specializes in  opinionated coverage of hot-button political topics such as illegal immigration. 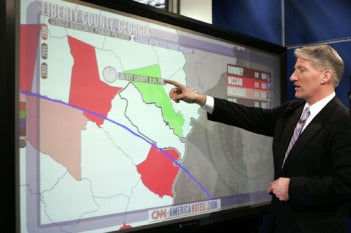 King currently hosts the Sunday morning talk show, "State of the Nation With John King." Like that program, King’s new show will focus on politics.

He may face stiff competition from MSNBC’s Chris Matthews, whose "Hardball" airs at the same time.

On Wednesday’s broadcast, Dobbs said that "strong winds of change in this country" had prompted him to leave the network that had been his home for more than 20 years and engage in "constructive problem-solving."

The move came after a long campaign by media advocates and civil rights groups to get the controversial host  fired for what they charged was biased reporting.

Klein denied that Dobbs’ departure had anything to do with pressure from these groups.

Dobbs joined CNN when it was founded in 1980, working as an economics correspondent on "Moneyline." He resigned from the network briefly in 1999 only to rejoin it less than a year later. His program was rechristened "Lou Dobbs Tonight" in 2003.

He will continue to work as a syndicated columnist and radio host. He also reportedly met with Fox News chief Roger Ailes last month.