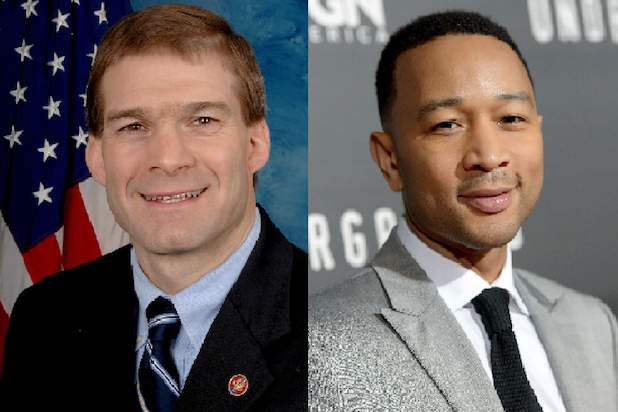 Jordan called CNN “fake news” and “desperate” Wednesday, after the network reached out to his former staffers and interns as part of a report on the accusations that the Republican congressmen turned a blind eye to sexual abuse when he served as wrestling coach at Ohio State University.

“Now @CNN is contacting all 100+ of our former staff and interns asking for dirt on me. Getting desperate! How can you ever trust such #fakenews?” Jordan tweeted.

Cue a massive outpouring of snark, scorn and outright frustration over Jordan’s framing of a core journalistic ethic — actually contacting witnesses and sources to determine how factual a story is. Including Legend, who quickly responded to Jordan, writing, “Definition of real news: calling a bunch of sources so you’re confident that you’re getting to the truth. Definition of fake news: making sh– up to fit your narrative. My fellow Ohioan seems to be a bit confused.”

Several former players have accused Jordan of ignoring attempts to report sexual abuse and covering up for the abuser, an accusation Jordan has consistently denied “It’s false,” he told Fox News last week. “Our coaching staff, we would’ve dealt with this.”

However, Jordan now has at least eight accusers, and a request was filed on Monday with the Office of Congressional Ethics to launch a preliminary investigation into the matter.

Calling around and asking people questions is called "reporting." How can you ever trust anything else? https://t.co/N6vFqyNp3B

Nothing says fake news like trying to gather sources and ensure credible stories. You nailed this one Jim — sounding more and more innocent every day.

Journalists doing actual fact-checking before they report in a story, NOT making up #AlternativeFacts #WhatAConcept

This is about as clear a statement as you will find that when Republicans say “Fake News” what they mean is reporting. https://t.co/2PoLr1DAiL