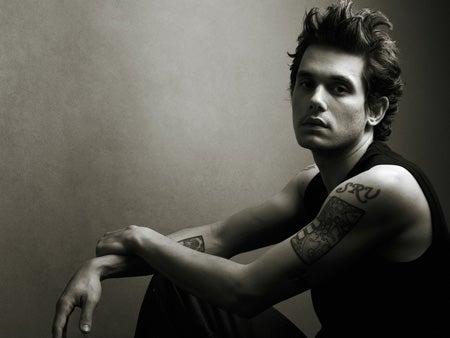 As you might expect, the piece is causing quite a media stir – with Mayer and “#penisnicknames” among the top trending topics on Twitter.

Mayer took to Twitter to apologize for using the "n-word" during the interview, and to say he may be done giving such "raw" interviews.

"It's such a shame that I did because the point I was trying to make was in the exact opposite spirit of the word itself," Mayer wrote. "It was arrogant of me to think I could intellectualize using it, because I realize that there's no intellectualizing a word that is so emotionally charged."

He continued: "And while I'm using today for looking at myself under harsh light, I think it's time to stop trying to be so raw in interviews. It started as an attempt to not let the waves of criticism get to me, but it's gotten out of hand and I've created somewhat of a monster."

"I wanted to be a blues guitar player. And a singer. And a songwriter. Not a shock jock. I don't have the stomach for it. Again, because I don't want anyone to think I'm equivocating: I should have never said the word and I will never say it again."

The entire, 6,300-word piece is a must-read, particularly if you’re into “confessions” of a completely self-aware rock star.

For those that merely want the bullet points, here’s a quick synopsis:

On rock stardom: “For me, it has never been about f—ing lots of girls. I could have f—ed a lot more girls in my life if I hadn’t been trying so hard to get them to like me.”

On Twitter: “I have never once said ‘I wish the press would leave me alone.’ With Twitter, I can show my real voice. Here’s me thinking about stuff: ‘Wouldn’t it be cool if you could download food?’”

On pornography: “It’s a new synaptic pathway. You wake up in the morning, open a thumbnail page, and it leads to a Pandora’s box of visuals. There have probably been days when I saw 300 vaginas before I got out of bed.”

On Aniston: "One of the most significant differences between us was that I was tweeting. There was a rumor that I had been dumped because I was tweeting too much. That wasn’t it, but that was a big difference. The brunt of her success came before TMZ and Twitter. I think she’s still hoping it goes back to 1998. She saw my involvement in technology as courting distraction. And I always said, ‘These are the new rules.’”

On black women: “I don’t think I open myself to it. My dick is sort of like a white supremacist. I’ve got a Benetton heart and a f—in’ David Duke cock. I’m going to start dating separately from my d—.”

On kissing Perez Hilton: “The only man I’ve kissed is Perez Hilton. It was New Year’s Eve and I decided to go out and destroy myself. I was dating Jessica at the time, and I remember seeing Perez Hilton flitting about this club and acting as though he had just invented homosexuality. All of a sudden I thought, I can outgay this guy right now. I grabbed him and gave him the dirtiest, tongue-iest kiss I have ever put on anybody—almost as if I hated fags. I don’t think my mouth was even touching when I was tongue kissing him, that’s how disgusting this kiss was. I’m a little ashamed. I think it lasted about half a minute. I really think it went on too long.”

On Jessica Simpson: “That girl is like crack cocaine to me … Sexually it was crazy. That’s all I’ll say. It was like napalm, sexual napalm. … Have you ever been with a girl who made you want to quit the rest of your life? Did you ever say, ‘I want to quit my life and just f—in’ snort you? If you charged me $10,000 to f— you, I would start selling all my shit just to keep f—ing you.’”