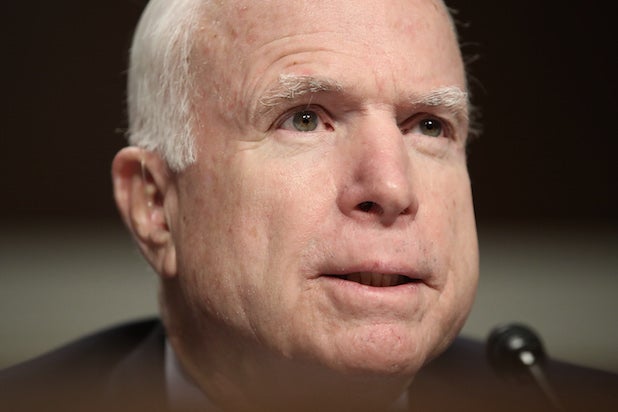 After becoming a social-media laughingstock Thursday morning with his line of questioning for Comey, Arizona senator McCain took to Twitter to explain himself — or, rather, blame the situation on his home-state baseball team, the Arizona Diamondbacks.

Senator McCain puzzled many during his questioning of Comey, repeatedly asking the former FBI head how the bureau could have completed its investigation into Hillary Clinton last July when the investigation into the Donald Trump campaign remains ongoing.

It initially appeared as though the Republican senator from Arizona was conflating two separate investigations — one into Clinton’s use of a private email server as former Secretary of State, and one into the Trump campaign’s ties to the Russian government. In his answers, Comey repeatedly tried clarify that those were two separate matters.

However, as McCain pressed on, it became clear that he was asking why the FBI was not looking into whether or not the Clinton campaign itself had any ties to Russia. The senator went on to say it demonstrated a “double standard” on the part of the FBI.

It also didn’t help that McCain at one point referred to Donald Trump as President Comey.

The Twitterati chimed in immediately, with MSNBC personality Rachel Maddow, for one, offering, “Whatever you think of the questions from every other Sen on the committee, they all made sense. McCain’s remarks were a departure from that.”

In a more detailed, non-baseball related explanation, McCain continued, “What I was trying to get at was whether Mr. Comey believes that any of his interactions with the President rise to the level of obstruction of justice. In the case of Secretary Clinton’s emails, Mr. Comey was willing to step beyond his role as an investigator and state his belief about what ‘no reasonable prosecutor’ would conclude about the evidence. I wanted Mr. Comey to apply the same approach to the key question surrounding his interactions with President Trump  — whether or not the President’s conduct constitutes obstruction of justice. While I missed an opportunity in today’s hearing, I still believe this question is important, and I intend to submit it in writing to Mr. Comey for the record.”

Also for the record, the Diamondbacks beat the San Diego Padres on Wednesday night, 7 to 4.