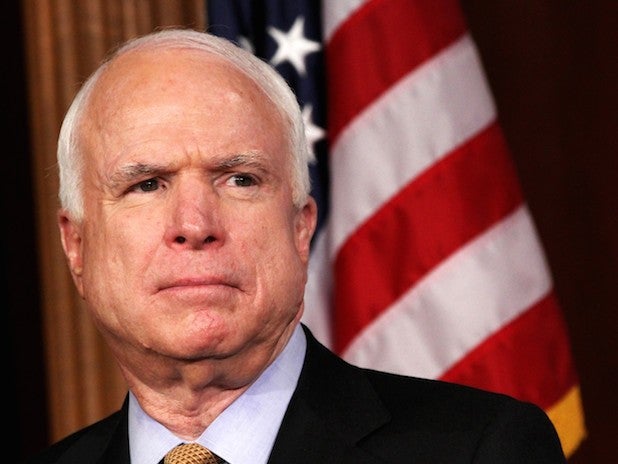 Arizona Sen. John McCain ripped Sony Pictures Entertainment on Thursday for creating a “troubling precedent” in cancelling the release of  “The Interview.”

“Recently reported intelligence findings that North Korea directed cyber-attacks at Sony Pictures Entertainment and Sony Pictures’ decision to cancel the release of an upcoming movie in reaction to those cyber-attacks, are profoundly troubling,” said McCain in a statement.

“By effectively yielding to aggressive acts of cyber-terrorism by North Korea, that decision sets a troubling precedent that will only empower and embolden bad actors to use cyber as an offensive weapon even more aggressively in the future.” he added.

“But, make no mistake. The need for Sony Pictures to make that decision ultimately arose from the Administration’s continuing failure to satisfactorily address the use of cyber weapons by our nation’s enemies.

“Indeed, North Korea’s cyber-attack on Sony Pictures is only the latest in a long and troubling list of attempts by malign actors to use cyber to undermine our economic and national security interests. From Iranian and Russian attacks on American banks to China’s orchestrated campaign to steal military secrets from our defense contractors, the Administration’s failure to deter our adversaries has emboldened, and will continue to embolden, those seeking to harm the United States through cyberspace,” he said.

McCain added that if he becomes chairman of the Senate Armed Services Committee next year, he will push to enact cyber security legislation.

Other politicians and public figures began to weigh in on the decision as well. On CBS This Morning, former Secretary of Secretary Colin Powell gave his view:

Gayle King: General, I want to turn to the Sony hack attack and reports that the North Korean government is behind it. What do you make of that, and if true, what are the implications of that?

Colin Powell: Well, I think if it is the Koreans, and I understand that the government will announce that, the American government will announce that, it’s a very serious issue. But you know this is a problem that all of us have to face in this internet age. But if we can identify that the North Koreans did it and if we can be specific about who did it within North Korea, then I think appropriate action has to be taken. I can’t tell you what that appropriate action is. We are rather limited in what we can do to North Korea that we haven’t already done, but I’ll wait and see what the administration announces and then we’ll go from there.