John Oliver took aim at Alabama governor Kay Ivey on Sunday night, ripping her to shreds for using anti-transgender messaging as a cornerstone of her re-election campaign. And, as always, Oliver didn’t sugarcoat his thoughts.

Before getting into his main segment, the late night host highlighted the Vulnerable Child Compassion and Protection Act, which Ivey signed and went into effect last week, making it a felony punishable by up to 10 years in prison to prescribe or administer gender-affirming care to transgender individuals under 19 years old. A judge on Friday blocked the part that made it a felony.

Still, Oliver fumed at Ivey even attempting to enforce something so “absolutely appalling.” You can watch the full segment in the video here and above.

“Look, there are lots of understandable reasons that someone in Alabama might be criminally punished,” Oliver said. “For murder, say, or for running a Ponzi scheme, or for creating this actual statue at an Alabama McDonald’s, of Ronald McDonald reimagined as a giant boll weevil. But no one should ever be facing criminal punishment for providing health care to young people.” 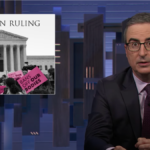 To illustrate how Ivey focuses on anti-trans messaging, Oliver pulled up a clip of one of her re-election ads, in which she says “Some things are just facts. Summer’s hot, the ocean’s big, and gender is a question of biology, not identity. Here in Alabama, we’re gonna go by how God made us, because we identify with something liberals never will: reality.”

Oliver then pointed out how many medical associations oppose bans on gender-affirming care. The “Last Week Tonight” host argued that if Ivey can face “any child and comfortably say, ‘Take away the care that gives them peace and a sense of self,’ you are a bad person.”

That said, Oliver had one suggestion on something good Ivey could do for the world — at least, the entertainment world. 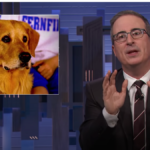 “In fact, the only good thing you could bring into this world is if you were played by beloved character actress Margo Martindale, in a limited series,” Oliver joked. “It wouldn’t be easy for Margo, because she’s so universally beloved, and you’re an absolute garbage lady, but it would be unmissable TV.”

And obviously, he didn’t let up, later asking Ivey “What the f— is wrong with you?” Eventually, he delivered his final blow.

“To put this in terms you will definitely understand, ‘Summer’s hot, ocean’s big, and the people of Alabama definitely deserve a lot better than you,'” Oliver sniped.