John Oliver is furious following the Supreme Court’s decision last week to overturn Roe v Wade, but he’s also mad at the Democrats who did nothing to stop it from coming – and reacted way more calmly than expected.

Naturally, Oliver made Roe v Wade the starting point of his show on Sunday night — though he didn’t want to. “I would love to talk about the fact that Beyonce released a new single or that this flappy king became the first bloodhound to win the Westminster Dog Show,” Oliver prefaced. “But sadly, I can’t do that, thanks to the Supreme Court which had itself a banner f—ing week.”

The “Last Week Tonight” host made a point of first scorching conservatives for their “gleeful” responses to the court’s decision, before turning his ire on Democrats, and their immediate responses to the decision on Friday.

“It has been dispiriting to see so many Democrats this week, utterly fail to meet the moment – a moment, by the way, they had nearly two months to plan for,” Oliver said. “Nancy Pelosi read a poem, one rep tweeted a picture of himself doing yoga. And so many Democrats sent out requests for money, really fulfilling that old democratic adage ‘When they go low, we ask you for $15.’ All of which seems so completely out of touch with how people were feeling.” 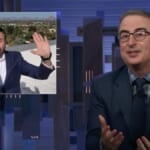 That said, Oliver noted that he wasn’t upset with all Democrats – just most of them.

“Some like Cori Bush and AOC seem to understand what people were going through,” Oliver amended. “As did, by the way, the Michigan Legislative Black Caucus, which released a statement saying, and I quote, ‘This is some bullshit’ – which it absolutely is. And I am not saying that all I want from leaders is shows of anger. But it has been depressing to see so many of them treat the end of Roe v Wade with the solemnity of a funeral instead of the urgency of a f—ing cardiac arrest.”

Oliver added that politicians like Pelosi and others “stand in stark contrast” to abortion rights activists who have been worried for years now, and helping those who need it. According to the “Last Week Tonight” host, those activists are the ones politicians should be striving to be like.

“Their unflinching commitment and compassion is something we are all going to need to find ways to emulate going forward both on an individual level, as we help one another navigate the nightmarish maze that basic healthcare is about to become, and hopefully eventually on an institutional one, if those in power can demonstrate enough commitment to this fight,” he said.

You can watch John Oliver’s segment on Roe v Wade in the video here and above. 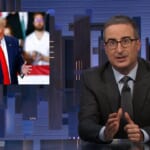 Also Read:
John Oliver Laughs Off GOP Claim That Democrats Have ‘Satanic Agenda': ‘That Would Require Having an Agenda’ (Video)