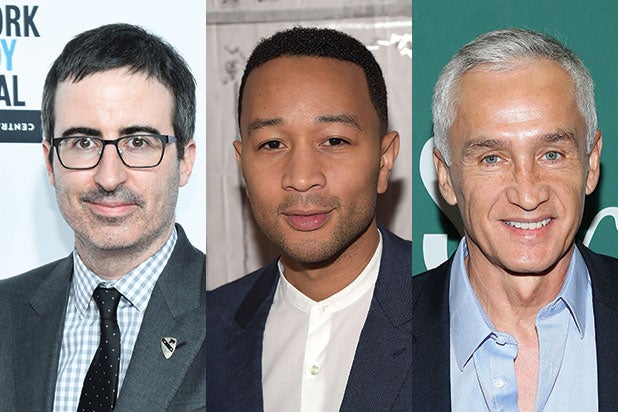 John Oliver, John Legend and Jorge Ramos are a few of the world’s greatest leaders, according to a new Fortune list that came out Thursday.

The publication’s third annual ranking, which has Amazon founder Jeff Bezos at No. 1 and Bhutan Prime Minister Tshering Tobgay at No. 50, ranks Legend surprisingly high: No. 6.

“He can boast a best-song Oscar, 10 Grammys, and at least 6 million albums sold. But Legend, 37, also embraces the grunt work of philanthropy–serving on boards, penning editorials, conducting listening tours in prisons and schools–and his advocacy is attracting as much attention as his hits,” the publication wrote.

Oliver, the host of HBO’s “Last Week Tonight,” was given the 30th spot on the list populated by world leaders including Pope Francis, Angela Merkel and Justin Trudeau.

“Oliver’s cerebral deep dives into social injustices on his HBO show, ‘Last Week Tonight,’ have created a new form factor in comedy–call it ‘investi-comedy,'” Fortune wrote. “There isn’t a topic he won’t tackle, from the plight of chicken farmers to native advertising to net neutrality. He insists he’s no more than a comedian, but he has effected change: His net-neutrality piece, for example, was credited for a shift in the FCC’s position (and for crashing the agency’s website). His merciless pre-Super Tuesday takedown of Donald Trump, meanwhile, has been viewed more than 22 million times on YouTube.”

Ramos, a Univision journalist who famously got kicked out of a Donald Trump press conference, was given the 43rd spot on the list.

“Ramos, who has co-hosted Univision’s flagship Spanish-language news show for almost 30 years, might be the most influential journalist in the U.S.,” the publication wrote. “ Ramos is part journalist, part advocate, a newsman who hammers candidates on immigration policy even as he urges Hispanic Americans to register to vote. Political analysts have found that Latinos are twice as likely to vote if they frequently watch Spanish-language news, a correlation they dubbed the ‘Jorge Ramos effect.'”