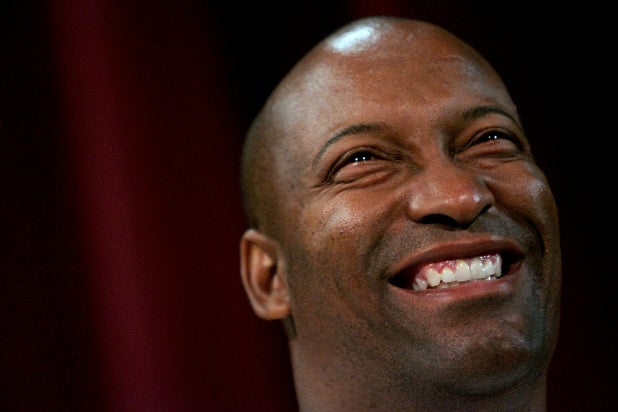 John Singleton was remembered across the film, TV, music, media and sports communities on Monday, with admirers ranging from Regina King, Chance the Rapper, Magic Johnson and more singing the praises of the deceased “Boyz N the Hood” filmmaker.

“A Genius,” Janelle Monae said Monday in reaction to news of the director’s passing at age 51. “Thank you for capturing US like no other.”

Singleton died Monday at 51 after suffering a stroke 13 days earlier.

Morris Chestnut, one of the stars who Singleton discovered for his debut film “Boyz N the Hood,” said in an Instagram post that Singleton gave him “a chance” and helped scores of black individuals see themselves better.

“People from all over the world literally tell me how they’re affected by ‘Boyz N the Hood.’ The magnitude and world-wide impact that his ground-breaking film would have for society cannot be measured,” Chestnut said. “Helping to bring awareness of what it takes to come to maturity as a black male in the ‘Hood, or die trying… Helping to gain a deeper understanding of the challenges faced. Dealing with challenges and adversity in life and in general. From that lesson, for anyone who watches ‘Boyz N the Hood,’ we are able to learn a little more about ourselves and each other. Hopefully, we are able to grow, evolve and gain a deeper love and understanding of our humanity.”

Many others in Hollywood, including Ava DuVernay, David Simon and Yvette Nicole Brown, championed the director’s career, which included films such as “2 Fast 2 Furious,” “Shaft” and “Poetic Justice.”

“John Singleton was, without question, one of the most important filmmakers of our generation. With his groundbreaking 1991 debut film, ‘Boyz N the Hood,’ he brought a sensitivity to urban Black life that was unprecedented for the time. With that film — which he wrote and directed — he painted the challenges as well as joys of growing up Black in Los Angeles during one of its most tumultuous times,” Gil Robertson IV, president and co-founder of the African American Film Critics Association, said in a statement.

“John didn’t just make his feature film debut in 1991 with ‘Boyz N the Hood,’ he exploded into Hollywood, our culture and our consciousness with such a powerful cinematic depiction of life in the inner city,” Directors Guild President Thomas Schlamme said in a statement. “I was so fortunate to be a collaborator with John on the show ‘Snowfall,’ and witnessed first-hand the enormous impact he had on so many. Despite such a busy and successful career, John prioritized his service at the Guild on the Western Directors Council, as former co-chair of the African-American Steering Committee, and as an alternate on our National Board –  showing up to support his fellow members every chance that he got. Our hearts are heavier today at the DGA, as we mourn this tremendous loss.”

“Over the course of his illustrious career, John remained steadfast in telling stories that illuminate the daily challenges faced by African Americans, particularly those living in the inner city,” Landgraf said. “We are honored and fortunate to have worked with John on ‘The People v. O.J. Simpson’ and the drama series ‘Snowfall,’ which he co-created and on which he is an executive producer and director.  I know that the cast and crew loved John as much as we did, and that they are heartbroken over this news.”

Singleton got his start as a student at the USC School of Cinematic Arts before making “Boyz N the Hood,” and his children Justice and Maasai are both alumni of the school. Dean Elizabeth Daley and chairman Frank Price each issued statements in the wake of Singleton’s passing.

“John will always be a beloved son of this institution. He started “attending” USC even before he was officially a student, while still a teenager in high school in South Los Angeles. Faculty and staff of the time remember him as a precocious film historian, roaming the halls, asking questions about their work, and engaging them in conversations about favorite films, his being Akira Kurosawa’s ‘Seven Samurai.’ The success of ‘Boyz N the Hood’ soon after graduation made him an instant inspiration and role model to our students, a role he embraced without hesitation and performed with wholehearted enthusiasm,” Daley said in a statement. “He headlined countless workshops and panel discussions, and even taught a class. When the School launched a speaker series focused on diversity, John agreed to be the first guest. Just three weeks ago, on April 8, he was on a panel celebrating SCA’s 90th Anniversary, at the Academy of Motion Picture Arts and Sciences. John frequently showed up just to watch films with students, and would stick around long after the official end time of any program to speak with them about their projects.  Importantly, he always brought students into the professional fold, hiring them on his films and television projects. We will forever be grateful for John’s unwavering love of the School of Cinematic Arts and its students. John brought South Los Angeles into SCA, inspiring other talented filmmakers from the neighborhoods around the School to come through the doors. He bulldozed his way into an industry that was not always welcoming, and did so with projects that reflected his community, his culture, and his passions. He is a giant in our hearts.”

“My wife Katherine and I are deeply saddened by the news of John Singleton’s passing. When I was asked to form a board of advisors for the USC School of Cinematic Arts in 1991, my greatest motivation in saying yes was my relationship with John, who exemplified the School’s reputation for finding and nurturing extraordinary talent,” Price said in a statement. “Just a few years before, as the chairman of Columbia Pictures, I made one of the best decisions of my career in buying the script of ‘Boyz N the Hood’ and hiring John to direct it. Since then, I have been honored to call him my friend. Over the years he has sent me first drafts of his scripts, from which I always learned something new about our place as Americans, and as human beings. I will miss his friendship, our conversations, and his contributions to our industry. Katherine and I send condolences to his mother, his children, and their family members.”

Read more of the reactions to Singleton’s passing below:

There aren’t many of us out here doing this. It’s a small tribe in the grand scheme of things. He was a giant among us. Kind. Committed. And immensely talented. His films broke ground. His films mattered. He will be missed. And long remembered. Thank you, John. #RunIntoHisArms pic.twitter.com/wKfOaCGFuA

John Singleton was a true inspiration. He made movies that told our stories, and he showed us that there could be limitless possibilities for young, black, creative people. Deepest condolences to his family and friends. https://t.co/6BLqMQXjPV

Saw “Boyz” at Bmore’s now-demolished Westview Cinema with the teenaged Fayette St. crew we followed for “The Corner.” They took the name CMB for Crenshaw Mafia Brothers & all but a few are now dead. Bullets, ODs. Mr. Singleton’s opus had truth; it stands.https://t.co/7mpizJTfSr

This is me & john Singleton on text in 2017 talking about doing a three six mafia biopic If this would had happened we would have won another Oscar for Best Picture John Singleton is a genius he knew the culture he helped us all I love you bro pic.twitter.com/yYo62kOSdv

This is way too sad. The word 'groundbreaker' is thrown around too easily, but it applied to John Singleton, an inspirational, influential film-maker. While he had many accomplishments in TV and film, you felt he had still more surprises up his sleeve. 51 is far too young to go. https://t.co/pyxb11seS7

The youngest-ever Best Director nominee and an inspiration to us all. John Singleton, you will be greatly missed. pic.twitter.com/cMWrDz9633

Rest up John Singleton. We never met, but Remember The Time literally changed my life. Thank you so much. God Bless you

???? I was hoping he would survive this. Thinking of #LukePerry again. Same tragedy at the same age. Both gone way too soon. #RIPJohnSingleton and thank you for your artistry.

Cookie and I are deeply saddened to hear about the untimely passing of our friend and outstanding filmmaker John Singleton.

John Singleton was a talented director and a kind man. He died too young. He will be missed.

God Bless this guy.
John Singleton Damn.
Such a nice guy.Talented guy.Generous
Gave so many people there Big Breaks.
What a nice loyal guy he was.#johnsingleton
Literally gave me the opportunity of my career. Was so supportive t& was my biggest fan making Higher Learning pic.twitter.com/c2xSCXfg2C

Saddened to learn that legendary director & pioneer John Singleton has passed away. My condolences to his family #RIP #JohnSingleton pic.twitter.com/mKrahYsdDV

Rest In Power, my friend. One of the greatest to ever do it. Thank you GOD for blessing us with this gift better known as John Singleton. Having trouble finding enough words to share just what you mean to me. Will always love you John! Your spirit will forever shine bright????

This is where it all started. The Genesis – The Genius – The Genre Maker/Star Maker (Taraji P. Henson, Ice Cube, Tyrese Gibson, Lawrence Fishburne, Regina King,Nia Long, Angela Basset, Cuba Gooding, Jr. – in no particular order as these are all great actors/actresses). John Singleton gave me a chance. When I left the audition for "Boyz N' The Hood" as he shook my hand, he gave me a stronger grip than normal and looked me in the eye. I felt he was basically giving me a signal that I had the job without telling me. From there, there was no comprehension of the massive chain of events that were about to follow. People from all over the world literally tell me how they’re affected by Boyz ‘N The Hood. The magnitude and world-wide impact that his ground-breaking film would have for society cannot be measured. Helping to bring awareness of what it takes to come to maturity as a black male in the 'Hood, or die trying… Helping to gain a deeper understanding of the challenges faced. Dealing with challenges and adversity in life and in general. From that lesson, for anyone who watches Boyz N’ The Hood, we are able to learn a little more about ourselves and each other. Hopefully, we are able to grow, evolve and gain a deeper love and understanding of our humanity. John Singleton, thank you for your vision. Thank you for holding my hand a little stronger. Thank you for connecting with me and thank you for connecting me to history. Thank you for connecting and transcending generations, nationalities, nations, races, communities, societies. Thank you, John Singleton, for connecting us all. #RIP #JohnSingleton

There was a time when I was struggling to pay my bills in film school and not sure this town was for me. And one day, not long after Boyz N The Hood exploded on the scene, my phone rang. It was John Singleton. John did not know me at all. But someone at USC had told him I was talented and he was kindly calling to offer me some words of encouragement. He told me to keep writing. I never forgot it. Praying for him and for his family now.