Have mercy! John Stamos gave an adorable shoutout to Elizabeth Olsen on his Instagram Friday, in honor of the “WandaVision” finale.

Olsen’s two older sisters — a connection that has somehow surprised a good portion of the internet — Mary-Kate and Ashley Olsen starred alongside Stamos in “Full House” for all eight seasons of the show, sharing the role of Michelle Tanner. During those eight years, Elizabeth Olsen hung out backstage — a lot.

In an interview with SiriusXM in January, Olsen joked “My earliest memories of that show is mostly after-school care.” According to the actress, she would generally get picked up from school and go straight to set to be with her family. So, in honor of Friday’s “WandaVision” finale, Stamos sent her some love, along with an adorable throwback photo of him hugging a young Olsen.

Also Read: 'WandaVision': Aaron Taylor-Johnson is the Pietro Wanda Needed (and We Deserved)

See the photo, above.

“One day she’s a little girl wandering the set, and next thing you know, she’s taking over a whole town, mindcontrolling the citizens to play out her favorite TV Sitcoms!” Stamos captioned the photo. “They grow up so fast..”

“WandaVision” itself did have a brief “Full House” tribute in the fifth episode of the season. In the opening credits, the camera pans up on Wanda and Vision running through grass with their sons Billy and Tommy, mirroring the scene of the Tanner family doing the same in the earliest “Full House” title sequence.

Shortly thereafter, the Vision family is sitting down to a picnic in the same little field, just like the Tanners did at the end of their title montage. 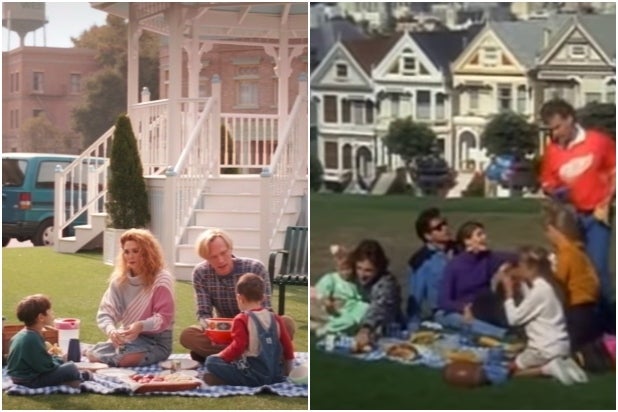 Many fans also believe that the choice to have Wanda and Vision become parents to twins in the 80’s-themed episode is also a nod to “Full House,” in honor of Olsen’s twin sisters. (While this is convenient, it is in fact part of Marvel comic lore that Wanda and Vision have twins).