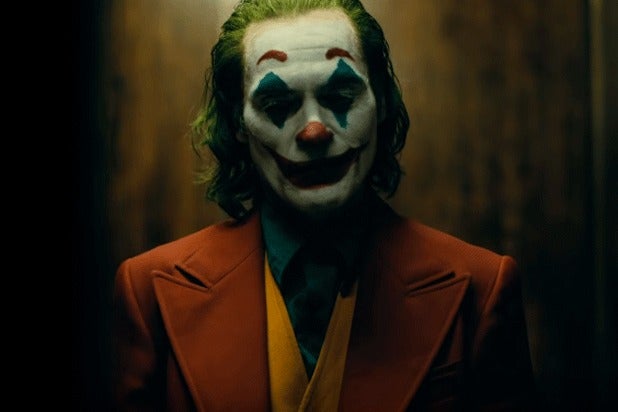 “Joker” is continuing to blow away box office expectations in its second weekend in theaters. After grossing $17 million on Friday, the Warner Bros./Village Roadshow/DC film is now expected to make $60 million this weekend, a remarkable hold that is just 37% down from last weekend’s $96 million opening.

At this pace, “Joker” will reach $200 million in domestic grosses on Monday and pass the entire domestic run of “It: Chapter Two” after less than two weeks in theaters. While awards buzz and the pre-release debate over its violence fueled last weekend, the strong word of mouth and discussion over the film’s merits has made “Joker” a can’t-miss film for audiences beyond the core 18-35 male demographic.

Family audiences, however, don’t have the R-rated “Joker” as an option. So they have pushed United Artists/MGM’s “The Addams Family” to No. 2 on the charts this weekend with $9.7 million grossed on Friday and an estimated $32.7 million opening from 4,007 screens. That beats pre-weekend expectations of a $25 million start.

“Addams Family” performed well despite the presence of DreamWorks/Pearl’s “Abominable,” which is making an estimated $7 million in its third weekend and is taking the No. 4 spot on the charts. Reception for “Addams” has been mixed with a 42% Rotten Tomatoes score and a B+ from audiences on CinemaScore. The film may hold on well through the end of the month as a seasonal offering for Halloween, but will face tough competition next weekend for families’ attention from Disney’s “Maleficent: Mistress of Evil.”

In third this weekend is Paramount/Skydance’s “Gemini Man,” which is fizzling out with an estimated $20 million opening from 3,642 screens. The Will Smith/Ang Lee blockbuster cost a reported $140 million to make with its CGI de-aging technology, and the budget was co-financed with Alibaba and Fosun alongside Paramount and Skydance.

“Gemini Man” will need to look overseas to recoup its costs, as poor word of mouth in the U.S. will lead to a short shelf life. The film has a 27% score on Rotten Tomatoes, and while audience reception is better with a B+ on CinemaScore and an 87% RT audience score, “Joker” remains the go-to selection for most adult audiences.

Between "It" and "Joker," Warner Bros. is turning Hot Girl Summer into Evil Clown Fall. What was once a symbol of silly circus fun has been turned into one of the most ubiquitous images in horror. So if you're in the mood for a circus from hell, there's plenty of evil clowns to choose from.