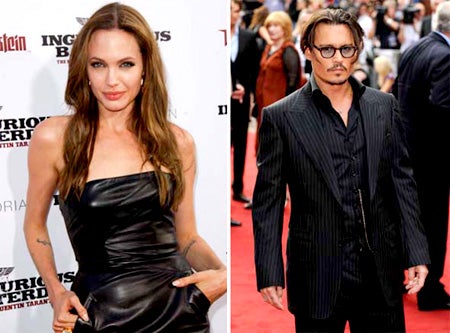 The film – helmed by Academy Award winning director Florian Henckel von Donnersmarck (“The Lives of Others”) and written by Julian Fellowes (“Gosford Park”), Christopher McQuarrie (“Valkyrie”) and Jeffrey Nachmanoff (“Day After Tomorrow”) – will shoot in Paris and Venice. Graham King’s GK Films is producing; Sony is distributing. Studio Canal is also a partner in the production.

The story revolves around Depp, an American tourist “visiting Italy to mend a broken heart.”

Jolie — who stars in the upcoming thriller “Salt” — recently dropped out of the “Wanted 2," according to New York magazine’s Vulture, killing the sequel. Now there are conflicting reports that "Wanted" co-creator Mark Millar plans to carry on without her.

After "The Tourist," Jolie is attached to star in Alfonso Cuarón’s "Gravity," and is reportedly in negotiations for Darren Aronofsky’s adaptation of "Serena."