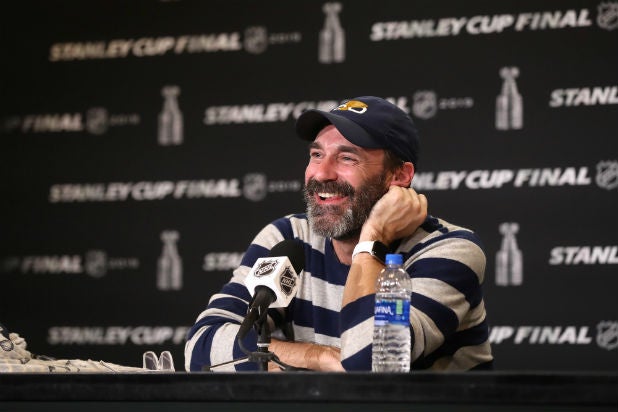 There’s nothing angelic about Jon Hamm’s opinion of the Boston Bruins.

Fortunately, that wasn’t needed on Monday night, when the Blues evened up the series with a 4-2 victory over the Bruins in Game 4 at the Enterprise Center in St. Louis, Missouri.

Hamm was spotted losing his mind and raising his arms in celebration when Blues center Ryan O’Reilly scored the winning goal as the clock ticked down in the third period. Earlier, O’Reilly had opened the statement game with a bang by firing the puck into the net within the first 43 seconds.

During the first intermission report, Golden Globe and Emmy-winner Hamm was in the booth telling commentators how if the Blues win the Cup, it could surpass the St. Louis Cardinals winning the 1982 World Series as the greatest moment of his life.

Hamm also didn’t hold back his disdain for Boston sports teams during a press conference before Saturday’s Game 3, in which the Bruins ultimately stomped on the Blues. “I have very strong opinions on New England sports,” Hamm told reporters, according to the Boston Globe. “Very few of them are positive.”

The 48-year-old St. Louis native said he is “still not over” seeing the Boston Red Sox beat the Cardinals in the 2013 World Series.

“It’s been an interesting back and forth between St. Louis and Boston, hasn’t it? Pick your sport. We’ve got kind of a beef, don’t we?” he continued. “I do like working in Boston, I made a couple movies in Boston. But I would like our team to win.”

Hamm starred in the 2010 thriller “The Town,” in which he played an FBI agent ironically out to capture a gang who robbed Fenway Park.

The “Mad Men” actor has been joined by other famous Blues fans including “The Office” alum Jenna Fischer, Andy Cohen and Scott Bakula during the Stanley Cup Finals so far.

NBC Sports’ coverage of Game 5 of the Stanley Cup Final from TD Garden in Boston begins Thursday night at 8 p.m. ET on NBC.