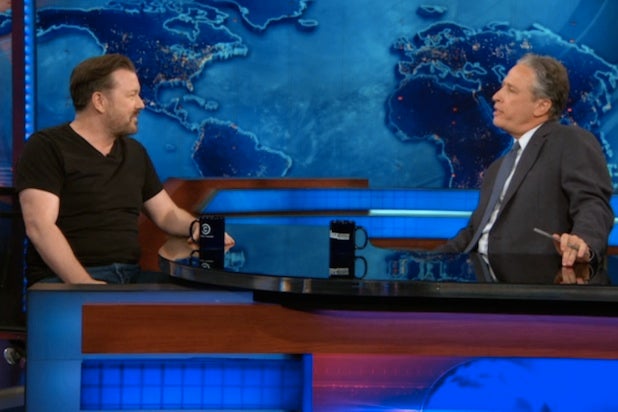 Jon Stewart called out Ricky Gervais for apparently gaining weight since the last time he appeared on the “Daily Show.”

“You look like s—,” Stewart said during Tuesday’s airing. “And there have been times you have come on this program and I thought to myself, ‘Oh, I didn’t know we had Tom Cruise on tonight,’ this is not one of those times, I don’t know what happened.”

“I feel like s—,” the actor said. “I’m basically a fat guy at heart and it’s killing me… trying to keep fit is literally killing me”

The “Derek” star interjected that he would rather die than continue working out, concurring with Stewart that death would be a “blessed relief.”

Stewart asked how the comedian wanted to die.

“What are you, a Road Runner cartoon?” Stewart asked.

Also read: Ricky Gervais on Golden Globes Gig: I Wanted to Shut Up the F—ing Idiots

“Running into a tunnel and coming out on a train or he sat on a spike, they’d all be laughing that he fell on a spike,” he said.

“Don’t you owe it to your audience, to some extent to go out in a blaze of glory?” Stewart asked.

Gervais observed the tragedy of a boy who died from mooning passing traffic.

“I gotta tell you, pants down, ass out, that is a way to go,” Stewart said.