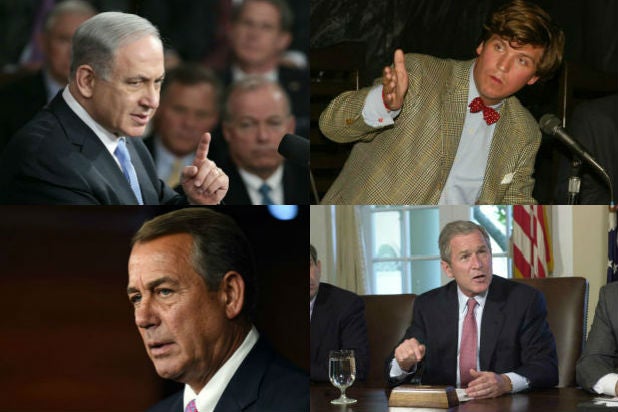 When Jon Stewart signs off from “The Daily Show” on August 6, he will have interviewed thousands of famous people, ranging from Presidents to pop stars.

However, there are a few people who never sat across from Stewart at “The Daily Show” desk that will definitely haunt us once he’s gone.

TheWrap has compiled a list of all the guests we wish Stewart had grilled during his tenure on the satirical news show:

Olbermann is famous for speaking his mind, especially about his not-so-pleasant thoughts on the George W. Bush administration and the Iraq war. Would he and Stewart have been able to find common ground or would Olbermann’s blistering invective been too much for the funnyman?

Stewart and Fox News host Sean Hannity frequently criticized each other’s work, like their polar opposite stances in the debate around Nevada rancher Cliven Bundy; however, neither ever appeared on the other’s show, much to our disappointment. We can now only imagine how the sparks would have flown.

Stewart famously sparred with the bow-tie wearing Carlson on the latter’s CNN show “Crossfire” in 2004. The two argued about “Crossfire’s” status as a legitimate news program, before Stewart called Carlson a “dick” as the show ended. Sadly, we never got to see Carlson refute his alleged dickishness on “The Daily Show.”

Chalkboard lover and former Fox News host Glenn Beck was a frequent target of Stewart’s criticism. Stewart once spent half an episode of “The Daily Show” parodying Beck’s dramatic style, complete with a recreation of Beck’s glasses and mannerisms; however, Beck never found his way over to Comedy Central to
call Stewart on the impression.

Conservative fire brand Ted Cruz was often in the national conversation, but he and Stewart never mixed it up on “The Daily Show.” Stewart frequently lampooned Cruz, however, including airing a segment called “Let’s Get Rid of Ted Cruz” when the Texas Senator announced he was running for President.

When the former Massachusetts governor ran for president against Barack Obama in 2012, Stewart ripped him as an out-of-touch millionaire. And while Obama has appeared on “The Daily Show” six times, Romney never found himself in the hot seat across from Stewart.

Roger Ailes, the chairman of Fox News, has every reason to want to have a showdown with Stewart. Stewart has made the mockery of the Ailes-led news network a cornerstone of his time on “The Daily Show.” Would Ailes be able to keep up with Stewart’s razor-sharp wit, or would the executive prove no match for the comedian from New York?

Stewart has had no problem asking tough questions, and Pope Francis has found himself answering more and more of them. Hailed as one of the most liberal Pontiffs in history, Pope Francis has been forced to address questions regarding the Catholic Church’s stance on gay marriage, sexual abuse by the clergy and evolution. How would the Jewish comedian fair against the leader of millions of Christians?

Speaker of the U.S. House of Representatives John Boehner has made his own attempts at humor, but we doubt he was laughing when Stewart ripped into him during the shutdown of the government in 2013. Boehner never found his way to “The Daily Show” set to defend the move — can’t imagine why.

What “Daily Show” fan didn’t dream about this? Stewart cut his teeth on the Bush administration and became one of the 43rd President’s staunchest critics. Stewart attacked everything from Bush’s social policies to his willingness to sink the country into wars in Iraq and Afghanistan. But as Stewart bids farewell to the satirical news show he made famous, this particular interview will have to remain just a dream.