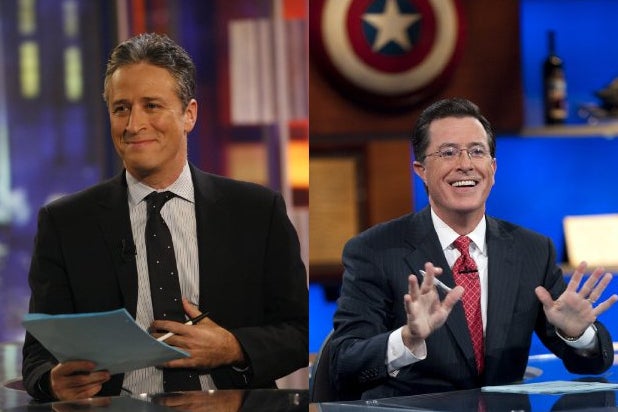 Once upon a time (well, a little over a decade ago), Jon Stewart was rumored to be a potential replacement for David Letterman at “Late Show.” Both men ended up staying at their respective jobs, but now that Letterman is definitely out the door from the late night CBS franchise in 2015, Stewart is all for a Comedy Central star taking the slot.

This time around, however, he’s discounting himself and throwing his support behind his cable satire partner-in-crime, Stephen Colbert.

Also read: The Most and Least Liked Potential Letterman Replacements – From Ellen DeGeneres to Conan O’Brien

“He is a uniquely talented individual,” the long-time “Daily Show” host told NY Magazine of the “Colbert Report” host. “He’s wonderful in ‘Colbert Report,’ but he’s got gears he hasn’t even shown people yet. He would be remarkable.”

Colbert has been whispered as one of CBS’ top candidates, but media pundits have expressed some concern that he might not have the same impact without the ironic layer of faux-conservative character that he’s played for the last nine years. Stewart isn’t buying such talk.

“He’s done an amazing job with just that very narrow cast of character, but he’s got a lot more he can show,” he added. “He’s got some skill sets that are really applicable, interviewing-wise, but also he’s a really, really good actor and also an excellent improvisational comedian. He’s also got great writing skills. He’s got a lot of the different capacities. Being able to expand upon [those] would be exciting.”

As TheWrap exclusively reported, CBS entered into talks with Chelsea Handler, who is leaving her show on E!, for a potential late night franchise. Elsewhere, Neil Patrick Harris has said that there have been no discussions about him hopping from CBS sitcom to late night star, while NBCU President and CEO Steve Burke remarked earlier this week that both Jay Leno and Tina Fey are contractually free to pursue such a position, as well.