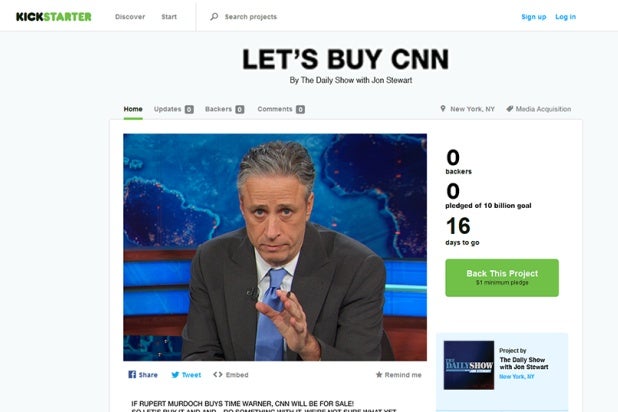 Zach Braff, watch your back.

On Tuesday night’s “Daily Show,” Jon Stewart discussed Rupert Murdoch’s bid to buy Time Warner and incorporate it into 21st Century Fox. The story went over the multiple ramifications of the deal, and included the obligatory joke about Time Warner telling Murdoch’s people, ‘to wait at home for their answer between noon and six PM.” A better line was calling him the “date rapist of media barons… with all due respect” as he discussed Murdoch’s penchant to not take “no” for an answer when he goes after a media property.

Also Read: How Much More Will Rupert Murdoch Have to Pay to Get Time Warner?

But the most surprising ramification would be that CNN would need to be sold, as it conflicts with Murdoch’s ownership of Fox News Channel. Stewart read off estimates that the news net would be worth $10 billion, and figured if anyone could raise the money to buy the network, it would be the “TDS” viewership. So he announced a Kickstarter campaign at LetsBuyCNN.com, complete with incentives that range from “You in a CNN 21 Box” to a “Marvin Savidge Couch Simulator.”

A search of the Kickstarter site yields nothing but a blank, so it’s pretty obvious this is just a goof. But who knows? Maybe someone will raise enough money to at least have a “CNN Anchor Hunger Games Fight to the Death.” That’s only a million. If Braff can do it, we can, right?