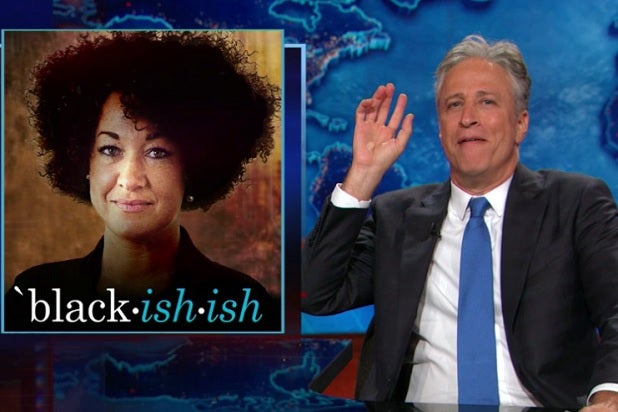 Jon Stewart took on the Rachel Dolezal controversy during Monday’s “Daily Show” in a new segment he called “Whaaaaaaaaat!?”

He then showed the now viral clip of a TV reporter asking Dolezal if she is African-American, to which she replied, “I don’t understand the question.”

See video: 'The View's' Whoopi Goldberg on Rachel Dolezal: 'If She Wants to Be Black, She Can Be Black'

“So her mouth says, ‘I don’t understand the question,'” Stewart said. “But her eyes say, ‘F–k. I’m busted.'” Stewart didn’t stop there, however, as he tore into Fox News pundits for their coverage of the Dolezal case and their claim that is representative of a larger liberal “transrace moment” in America and that  racism cannot be as widespread as people believe if a white woman wants to be black.

“Yes, a white person,” Stewart said. “Why would a, singular, white person. You might also ask, perhaps more appropriately, ‘If being black is such a sweet deal, why are millions of white people ignoring this once in a lifetime opportunity?'”

Stewart then tried to turn things over to “The Daily Show’s” senior black correspondent, only to be greeted by the very white Jordan Klepper. Luckily, Jessica Williams came out to set the record straight on this controversy.