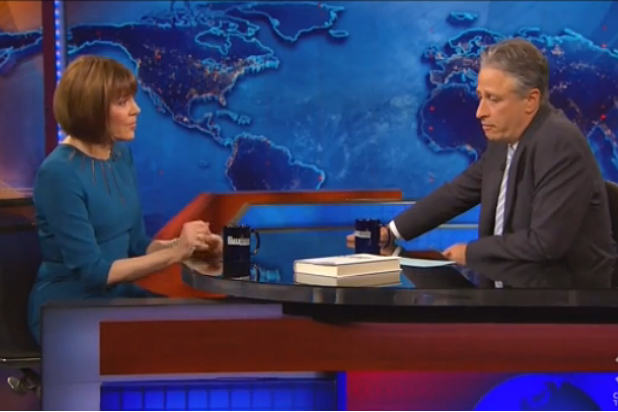 Former New York Times journalist Judith Miller walked into the lion’s den on Wednesday when she appeared on “The Daily Show” and went head-to-head with Jon Stewart over her reporting during the lead up to the Iraq War.

Miller’s reporting of Saddam Hussein‘s Weapons of Mass Destruction (WMDs) both before and after the 2003 invasion sparked intense controversy when it was discovered to be based on faulty information — especially from now-discredited source Ahmed Chalabi — and Stewart was quick to point the finger of blame for the conflict at the disgraced journalist.

“I believe that you helped the administration take us to the most devastating mistake in foreign policy that we’ve made in 100 years,” Stewart told her. “But you seem lovely,” he added.

“That’s why I wrote the book — I hoped that people like you would read it and determine that it was really, really hard to do this kind of reporting,” said Miller, referring to her new book “The Story: A Reporter’s Journey,” released this month.

“I wasn’t alone, I had lots and lots of company. The intelligent sources we were talking to had never been wrong before,” she said.

Rather than coming from Dick Cheney or George W. Bush, “the information came from the men and women who had steered me right on Al Qaeda and 9/11, who had told me that the former Soviet Union had a huge cache of biological weapons that they had never acknowledged and they were right,” she said.

“I went back to them and asked: ‘What happened? How did you get it wrong, how did I get it wrong?'” she continued. “That’s what I try to do in this book.”

The late-night host and political satirist wasn’t accepting her explanation quietly, however.

“There was a momentum that took us to war in Iraq,” Stewart said. While Miller thinks it was 9/11, he believes there was “a concerted effort to take us to war in Iraq, you had to shift — with energy — the focus of America from Afghanistan and Al Qaeda to Iraq. That took effort.”

When asked if she agreed, Miller replied: “It took persuading, and they persuaded a lot of Democrats — Hillary Clinton, John Kerry. The intelligence was what it was.”

“The intelligence was not what it was and not everyone got it wrong,” Stewart responded harshly.

“Somebody pointed the light at Iraq and that somebody was the White House and the Defense Department and [Donald] Rumsfeld,” he continued, citing the former Secretary of Defense as saying “find me a pretex to go to war with Iraq.”

Miller claimed the reporters didn’t know that: “All journalists are manipulated and all politicians lie.”

Stewart then focused on the “aluminum tubes article” on the front page of the New York Times in September 2002 titled “U.S. Says Hussein Intensifies Quest for A-Bomb Parts,” about Iraq building banned weapons that Miller wrote with Michael Gordon.

Stewart picked out a line where an unnamed source said “we don’t want the smoking gun to be a mushroom cloud,” stating that the phrase came from the White House Iraq group five days before she wrote the article even though “you said the information doesn’t come from them.”

“This administration was very clearly pushing a narrative,” Stewart said, and Miller lost sight of that by not reporting it.

While Miller claimed she reported “what the intelligence community believed,” Stewart said she wrote what the White House was feeding her.

“Obviously we are never going to see eye to eye on it. I appreciate you coming on the program,” he concluded, bluntly wrapping up the conversation. “These discussions always make me incredibly sad because I feel like they point to institutional failure at the highest levels and no one will take responsibility on it and they pass the buck.”

“I think they point to intelligence failures that I still worry about — we are still relying on the same information on Iran, North Korea, Pakistan and the other countries,” Miller replied.

“Hopefully, given the same effort, we’ll get to invade them soon,” Stewart said, ending the interview with a dry laugh.