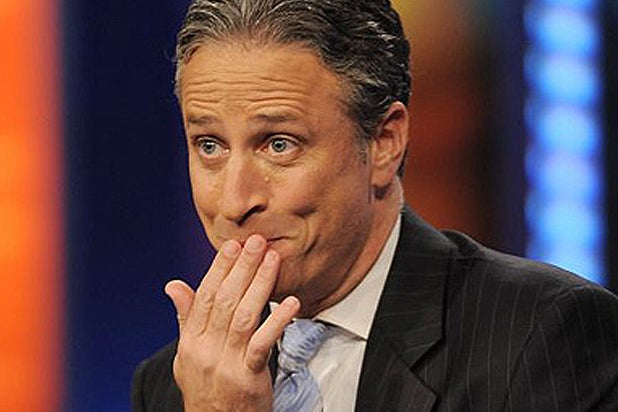 It’s official. Jon Stewart is leaving “The Daily Show” later this year after 16 years as host of the iconic Comedy Central program.

His announcement during Tuesday’s taping — one that guest David Axelrod later tweeted was an “emotional night” — was totally unexpected, spreading throughout social media like wildfire. According to Twitter Data, there were over 130,000 tweets related to the news within the first hour and a half.

Since taking over the program from previous host Craig Kilborn in 1999, Stewart has built an unlikely institution, not only entertaining — but, for better or worse — informing millions of Americans and managing to hilariously hold those in power accountable in ways his more serious journalistic counterparts couldn’t.

So fans — including the celebrity set — have been taking his departure understandably hard.

CNN news man Anderson Cooper was as stunned as the rest of us:

We lose Colbert, and now we lose Jon Stewart?! This is the worst timeline, ever.

Congratulations to Jon Stewart on an extraordinary groundbreaking run.

NY1 News anchor Pat Kiernan wanted to know what everyone is asking:

Still haven't seen anything in Jon Stewart stories to explain timing. Anyone?

Famed statistician Nate Silver had some insights into to Stewart’s possible future:

Sorta hoping Jon Stewart is leaving to play minor league baseball and will be back in two years with Dennis Rodman in tow.

And New York Post columnist Bart Hubbuch said everything with one picture:

But it was the fans who took it the hardest:

First Stephen Colbert leaves his show, and then Jon Stewart. It's the end of an era, man.

The end of the Daily Show with Jon Stewart? #WHAT?

Jon Stewart has done more to engage next generation in the news than any other single person.

OMG! Jon Stewart leaving his Comedy channel show later this year. Where will we get our news now? via FoxNews

reminder: jon stewart is not dying

Perhaps actor and director Jay Duplass summed it up it best:

what will we do without you, Jon Stewart, oh captain our captain? @TheDailyShow