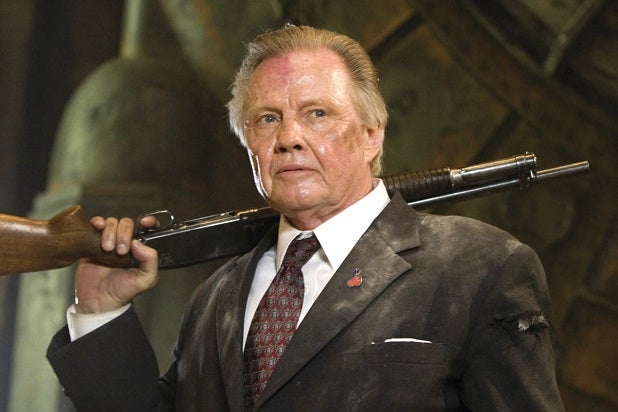 In the first of  two, the Academy Award-winning actor praised the president’s decision-making skills and positive impact on the country while “battling the left and their absurd words of destruction.”

“This job is not easy, for he’s battling the left and their absurd words of destruction,” Voight said. “I’ve said this once and I’ll say it again — that our nation has been built on the solid ground from our forefathers, and there is a moral code of duty that has been passed on from President Lincoln. I’m here today to acknowledge the truth, and I’m here today to tell you my fellow Americans that our country is stronger, safer and with more jobs because our president has made his every move correct.”

Voight continued: Don’t be fooled by the political left, because we are the people of this nation that is witnessing triumph. So let us stand with our president. Let us stand up for this truth: that President Trump is the greatest president since Abraham Lincoln.”

To my fellow Americans. Part 1. pic.twitter.com/srw4zXCRKJ

To my fellow Americans. Part 2. pic.twitter.com/uhqpbzwHhS

Voight, who is the father of actress Angelina Jolie, has been an active voice on the side of Trump since the real-estate mogul became president in 2016. His Twitter profile is filled with similar videos and Tweets, which praise the president and his supporters while condemning celebrities that have verbally denounced President Trump.

“Let Donald Trump know we are completely behind him, and may God give him the strength to continue his calling,” he Tweeted in October 2016.

As with most of Voight’s posts, the social media reacted swiftly to the recent videos, social media was mixed but not balanced, with a larger group slamming Voight’s comments. Here are a few reactions on both side of the Trump debate:

Isn’t this the part where all the magas say “shut up and dribble” or something?

I haven’t been this disappointed in a Jon Voight performance since Anaconda.

The only thing they have in common is a civil war. One is for emancipation, the other is trying to make racism great again

God bless your brave soul for standing firm in your beliefs against the Hollywood mob! ????????

Thank you Jon Voight for being loyal to us and @realDonaldTrump! There are not a lot of people left in the world who understands loyalty!

What the hell is he smoking?!