This Friday, “Cruella” hits theaters, marking Disney’s latest forray into telling an unexpected origin story. But for “The Late Late Show with James Corden,” there are still plenty of other obscure characters to give movies to — so they went ahead and created trailers for them, with the help of The Jonas Brothers.

The bit pitches three movies, each one focusing on a character more random than the last. First, there’s the origin story of Eeyore, showing his journey to depression. With Joe Jonas starring as Eeyore himself, it’s revealed that the donkey enlists as a drug mule to save his and his friends’ home in the Hundred Acre Woods.

In fact, that’s how Eeyore lost his tail; it was cut off during a drug deal gone bad. After his harrowing journey, Pooh (Kevin Jonas) and Tigger (Nick Jonas) finally question if everything’s okay, but by then, Eeyore is the deep-voiced, sad little creature that we’ve come to know. 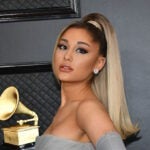 But don’t worry, it only gets weirder from there. The next origin story is that of the accordion-playing chef from “Lady and the Tramp.” In his story, the chef (James Corden) is overworked and his spaghetti is under-appreciated, so he snaps. (No, literally, he snaps some noodles into a pot). His version of doing something crazy? Feeding pasta to Lady and the Tramp.

But still don’t worry, because there’s one more origin story to come, this time for the most unimportant character yet. Remember the lady who screamed “I need six eggs!” during “Beauty and the Beast?” Well, it’s time to find out why exactly she needed six eggs.

Spoilers: her home life is rough, and her kid (James Corden) needs six eggs to survive. It makes absolutely no sense at all, but hey, it exists.