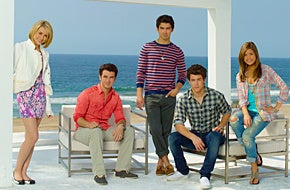 Kevin, Joe and Nick Jonas star, along with Chelsea Staub and Nicole Anderson.

And if you (or your kids) need even more JoBros, they also star in Disney Channel’s short-form series "Jonas Brothers Living the Dream 2," which gives viewers unprecedented access to their lives on stage and off during their European tour, and in the contemporary movie musical, "Camp Rock 2 The Final Jam," premiering Friday, Sept. 3.

For this second season, the show is shot entirely on location around Los Angeles, where Kevin, Joe and Nick – and their security chief, Big Man (Feggans) – are fresh off their world concert tour and ready for a summer vacation in a rental house high in the Hollywood Hills. Familiar faces Stella (Staub) and Macy (Anderson) join them and wind up sharing a nearby guesthouse with Stella’s aunt Lisa.

The all-new 13-song soundtrack includes "L.A. Baby (Where Dreams Are Made of)," "Chillin’ in the Summertime" and "Your Biggest Fan."

New executive producers this season are Lester Lewis ("The Office") and Paul Hoen ("Camp Rock 2 The Final Jam"). The series was created by Roger S.H. Schulman and Michael Curtis and is an It’s A Laugh Production in association with Disney Channel.