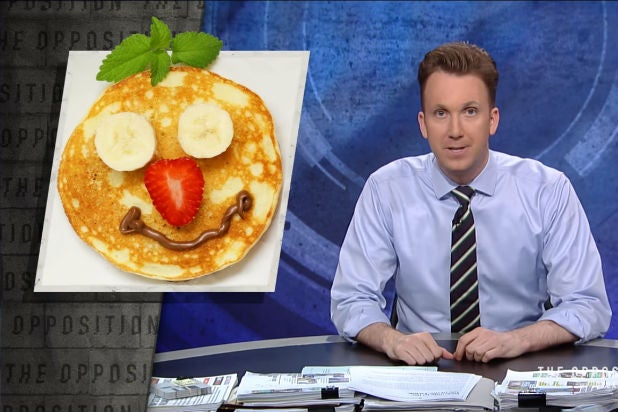 Comedy Central has canceled “The Opposition” after one season — but executives have ordered a new Jordan Klepper series. This one will be a weekly primetime show.

“We are excited to announce ‘Klepper,’ a new, primetime weekly series created by and starring Jordan Klepper,” Comedy Central said on Friday. “The new series will premiere in early 2019 with production beginning in July. Accordingly, production on ‘The Opposition’ will cease after its June 28 episode. We thank the cast and crew of ‘The Opposition’ for their incredible efforts in creating such a bold, provocative show and look forward to the launch of Jordan’s new primetime series next year.”

“I couldn’t be more proud of the hard working, creative staff of ‘The Opposition’ who tirelessly filtered the world through the chaos of America’s fringe,” Klepper added. “This staff is remarkable. Moving forward, I will be leaving ‘The Opposition’s’ paranoid Jordan Klepper character behind. I figured maybe, right now, the world could use one less asshole. This new Jordan Klepper guy I know intimately cause I’ve been him for the better part of my life. He’s eager to get into the field, talk to real America and make a kickass television show.”

Here is the new show’s logline, straight from Comedy Central:

In this new, primetime series, Jordan Klepper gets out of the studio and into the real world, speaking to real people and addressing issues important to him and to the country. “Klepper” intends to drive the narrative instead of regurgitate it, engaging people and challenging attitudes, perceptions and bias. “Klepper” will give the forgotten folks the attention they deserve.

Reruns of “The Office” will occupy the 11:30 p.m. time slot following “The Opposition’s” June 28 series finale.