Jordan Myles, a wrestler on WWE’s NXT brand, is feuding with his employer over a t-shirt design for his character. The piece of merchandise, which has since been pulled and replaced, resembled a “Sambo” doll.

On Monday morning, Myles followed up his original criticism of the shirt with a string of tweets and a video where he sticks up his middle finger and says “WWE doesn’t care about black people.”

Myles also called Ring of Honor wrestler Jay Lethal an “Uncle Tom,” and criticized the WWE for employing Hulk Hogan after using the n-word. “The fact that @HulkHogan is still employed after giving the locker room an apology for being caught says enough,” Myles wrote.

Myles, real name Albert Hardie Jr., appears to have deleted the video tweet and the one calling Lethal an “Uncle Tom.” TheWrap captured screenshots of both: 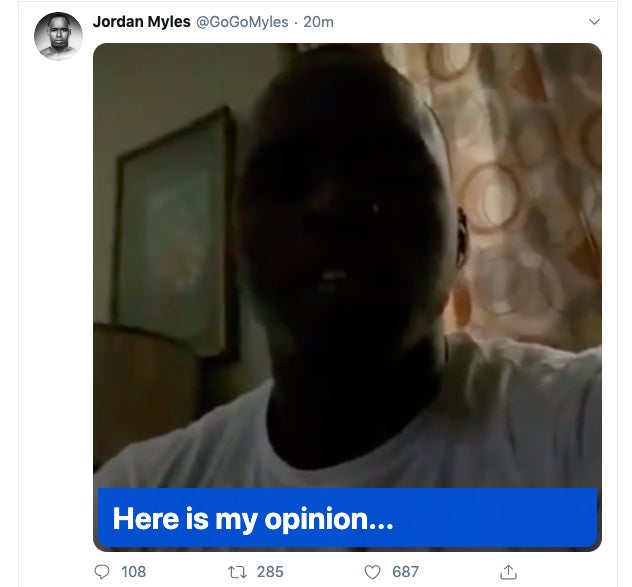 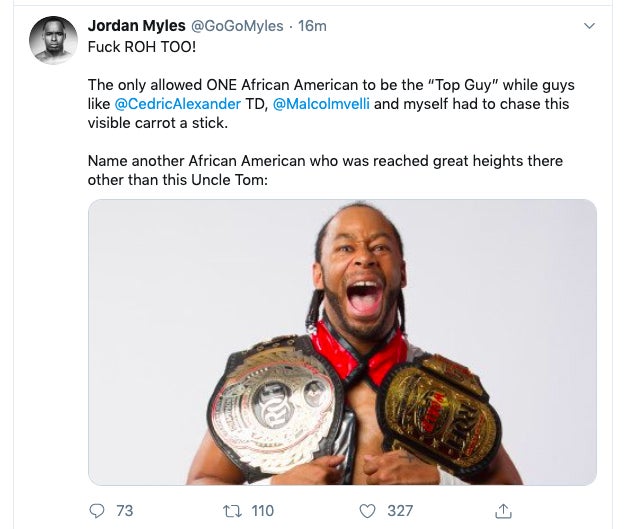 “Albert Hardie Jr. (aka Jordan Myles) approved this t-shirt for sale,” a WWE spokesman said in a statement. “As always, we work collaboratively with all of our performers to develop logos and merchandise designs and get their input and approval before proceeding. This was the same process with Albert, and we responded swiftly once he later requested that the logo/t-shirt be redesigned.”

“No t-shirts were sold,” WWE said.

In terms of its likeness to a Sambo doll, the t-shirt’s black backdrop would be the face, the red looks like lips, and the white, spelling out Myles’ name, would be smiling teeth.

See the shirt below. 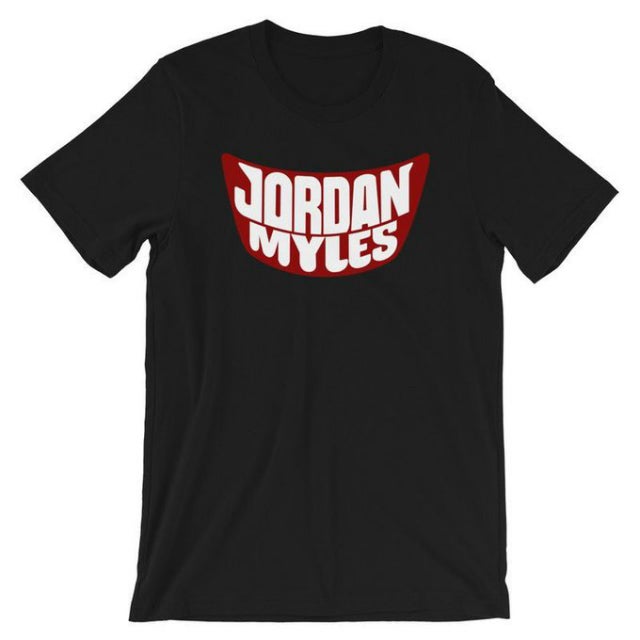 “The Story of Little Black Sambo” is a book originally published in 1899. Though the titular character in the book is a South Indian boy, the simplistic style of its illustrations spawned a caricature that would become a symbol of racism against African-Americans.

On Saturday, Myles tweeted out the shirt and promised WWE would “regret” making it.

The next morning, Myles called out his bosses directly. He asked his followers and supporters to change their profile photos to black and white in solidarity.

“I will keep posting this till my voice is heard. I’m not sorry for anything I say or do,” Myles wrote yesterday on Twitter.

“Representation is important,” he tweeted, adding: “If this is @VinceMcMahon & @TripleH ‘vision’ of me then this is a slap in the face to EVERY African American performer, fan, and supporter.”

I will keep posting this till my voice is heard. I’m not sorry for anything I say or do.

If this is @VinceMcMahon & @TripleH “vision” of me then this is a slap in the face to EVERY African American performer, fan, and supporter. pic.twitter.com/S6Gtg9e4lP

I’ve used this shirt as fuel. I knew the shirt existed and my soul hasn’t been able to rest properly since I’ve laid eyes on it. My voice will be heard… my true opinion will be heard.. and MY PEOPLE will have their moment. https://t.co/uMErUAGr43

Nothing poor about my soul.

This shirt is what’s wrong with America and the wrestling industry. https://t.co/RubgtSRxe1

Does it matter if the shirt was replace? The FACT that they even made the first one overshadows anything till WE get what we deserve. https://t.co/mLjKeUDNNt

Protest with by turning your photos black and white on Twitter.

When I originally saw the design I was uncomfortable. Rather than addressing the issue I decided to counter offer with another.

Baker Landon lied to my face! He said HHH wanted this design so my hands were tied. I spoke with @TripleH in person and his impression was I approved https://t.co/JndOSasTGK

Don’t believe me? Email him and ask him yourself.

THE WHOLE WWE SYSTEM IS FRAUD!
THEY CREATED THIS SYSTEM WHERE YOU CANT TRUST ANYONE, YOU GROW COLD, AND YOU GROW APART FROM WHAT YOU LOVE THE MOST!

The fact that @HulkHogan is still employed after giving the locker room an apology for being caught says enough.#ForTheCulture